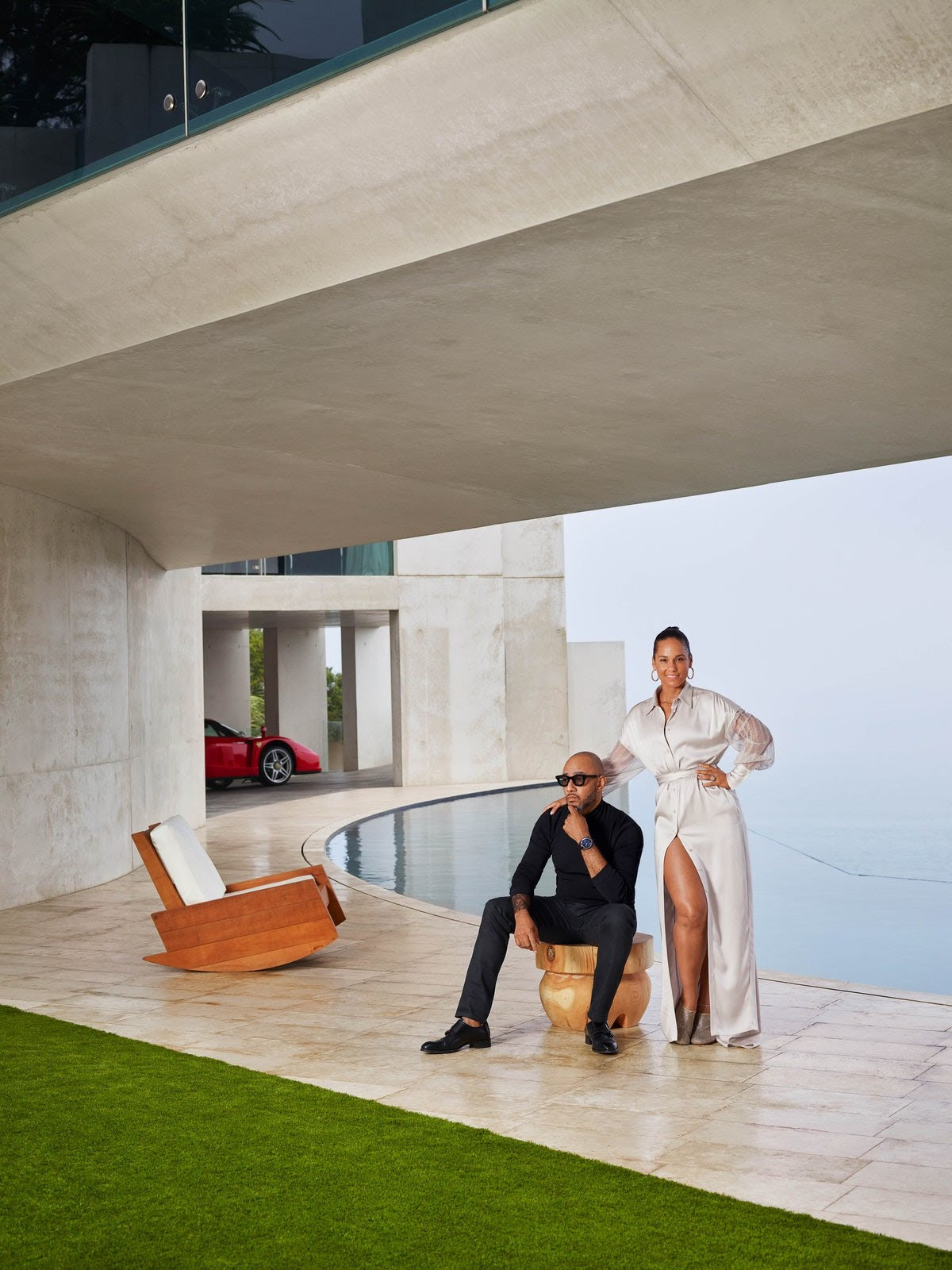 Singer, Alicia Keys and her hit-producer husband, Swizz Beatz have opened the doors of their art-filled California mansion to Architectural Digest.

The modernist mansion is located in the mountains north of San Diego.

It is made of white concrete and glass rises from the cliffside. The property is nicknamed “Razor House” after the nearby Razor Point Trail.

Alicia Keys and her husband Kasseem Dean, better known as Swizz Beatz together with their children Genesis and Egypt have since given the residence their own name, “Dreamland”.

The mansion is filled with artworks by Black artists, a fleet of Ferraris, an infinity pool and a recording studio tucked away in a space Swizz beatz calls “the grown up floor.”

The home which views over the Pacific Ocean, the home is said to have inspired Tony Stark’s mansion in the “Iron Man” franchise, according to Architectural Digest, which is dedicating the cover story of its December issue to the property.

Speaking to the magazine, Swizz Beatz revealed that he set his heart on the home long before purchasing it.

The nearly 11,000-square-foot mansion, a photo of which served as his phone wallpaper for eight years before the couple moved in, was “incredibly important to me,” he is quoted as saying.

“Every wall in this house, every bit of it, is sculpture,” he added. “These beautiful ‘S’ shapes, these chevrons going down the hillside, curvatures flying in space over your head. It’s more akin to sculpture than architecture.”

When the couple’s real estate agent messaged to say the home was on the market, Dean was worried that Keys — who loved living on the East Coast — would be reluctant to move out west.

“She’s Miss New York,” he said. “They might as well make a sculpture of her the (new) Statue of Liberty.”

But after the couple were invited by the the previous owner to spend a weekend exploring the house, Keys began imagining her life there, according to Architectural Digest.

She was convinced to relocate during a morning meditation session at the property, as she watched parasailers float over a nearby mountain.

“In that moment, I felt like I was witnessing a beautiful metaphor, and I wanted to not ever forget how endless we are and how the unimaginable can happen,” she told Architectural Digest.

After finally purchasing the home in 2019, Keys and Swizz tasked New York-based interior designer Kelly Behun with transforming the space into “Dreamland.”

The house has Moroccan wool rugs and velvet and shearling upholstery.

Key items of furniture echo the building’s gentle curves, with rounded couches and circular coffee tables spotted throughout the house.

As prolific art collectors, Keys and Swizz Beatz put art at the heart their home. With a portfolio of over 1,000 artworks, amassed over two decades, the pair have lined their walls with museum-worthy pieces by the likes of KAWS and Jean Michel-Basquiat not forgetting black artists like Kwame Brathwaite, Lauren Pearce and Burkinabe photographer Sanlé Sory

Sentimental items are also woven into the home decor, including a baby grand piano that was gifted to Keys by her record label when she turned 16.

See the video of the mansion below