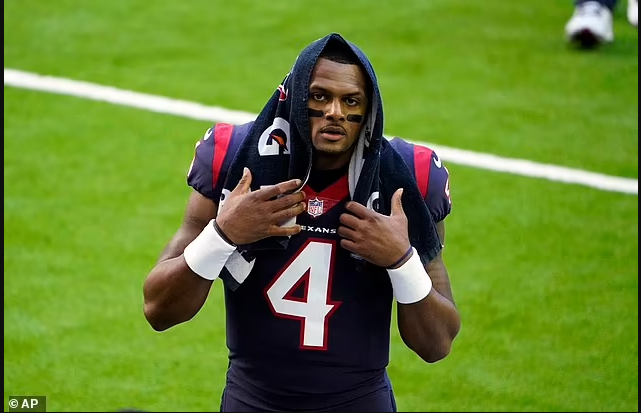 Settlement talks between Houston Texans quarterback Deshaun Watson and the 22 women suing him for sexual misconduct ‘break down’ has broken down because his attorneys insisted the plaintiffs sign nondisclosure agreements.

‘In what was submitted to us, there were nondisclosure agreements and many of the women pushed back on those,’ the plaintiffs’ attorney, Tony Buzbee, told Houston’s Fox 26.

Although Buzbee changed the language in the nondisclosure proposal ‘substantially,’ he said Watson’s stipulation was ultimately a ‘deal breaker.’

‘There were still some women who said, ”I’m never going to sign that,”’ said Buzbee, who has since confirmed his quotes to DailyMail.com.

In March and April, Watson was accused of forcing women to perform oral sex on him, disrobing and forcibly touching massage therapists and other women, among several claims.

He denied the allegations but admitted that any sexual contact between himself and the women was consensual. The alleged incidents all took place in 2020 and 2021.

Watson, a first-round pick who started for the Texans over his first three seasons, has been benched in Houston following the accusations and his own reported trade demands.

The Miami Dolphins were interested in acquiring the former Clemson star at Tuesday’s NFL trade deadline, according to multiple reports. Talks progressed so far that Dolphins owner Stephen Ross was granted permission to speak with Watson, according to the NFL Network’s Ian Rapoport.

According to Pro Football Talk, Watson’s mediation with plaintiffs played a major factor in the doomed trade talks.

When the Texans learned of a potential settlement between Watson and his accusers, the team’s asking price for the embattled 26-year-old soared and talks broke down from there, according to PFT.

Meanwhile the Houston Chronicle reported that the trade would have been completed between the Texans and Dolphins if Watson’s legal issues could be resolved before the trade deadline.

The rate at which young people seek to know their future is very disturbing — Actor, Ugezu J Ugezu