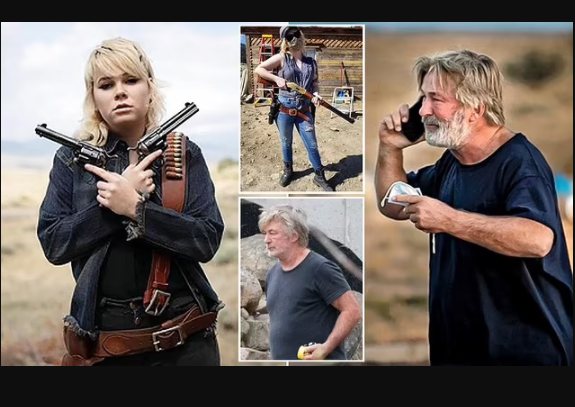 A lawyer for the 24-year-old armorer on the set of his film Rust has claimed that Alec Baldwin was told never to point his gun at anyone, regardless of whether it was loaded or not.

The Hollywood actor, 63, shot and killed cinematographer Halyna Hutchins on set in New Mexico on October 21. He was handed a gun by the first assistant director, Dave Halls, who told him it was a ‘cold’ gun – not loaded with live ammunition.

The guns were the responsibility of Hannah Gutierrez Reed, the armorer.

But on Thursday, a lawyer for Gutierrez Reed whose father, Thell Reed, is a veteran armorer – insisted that she had taken her role extremely seriously and had briefed all the actors, including Baldwin, that they should never point even unloaded guns at people.

‘Hannah was incredibly safety conscious and took her job very seriously from the moment she started on October 4,’ Jason Bowles, one of her attorneys, said in a statement shared with Fox News on Thursday.

‘She did firearms training for the actors as well as Mr. Baldwin, she fought for more training days and she regularly emphasized to never point a firearm at a person.’

‘Never in a million years did Hannah think that live rounds could have been in the “dummy“ round box,’ he later said Thursday.

‘Who put those in there and why is the central question.’

Gutierrez Reed, in her affidavit, told the Santa Fe Sheriff’s Office that the gun had been locked in a safe during a lunch break prior to the fatal shooting.

Yet Robert Gorence, another attorney for Gutierrez Reed, told The New York Times that she loaded the guns with dummy rounds for an afternoon filming session, placed socks over them to prevent passersby from picking them up, and went off to lunch.

‘The answer is no, because there were no live rounds.’

Both Gorence and Bowles believe the focus on Gutierrez Reed is unfair.

No charges have been filed in the shooting, but authorities are still investigating.