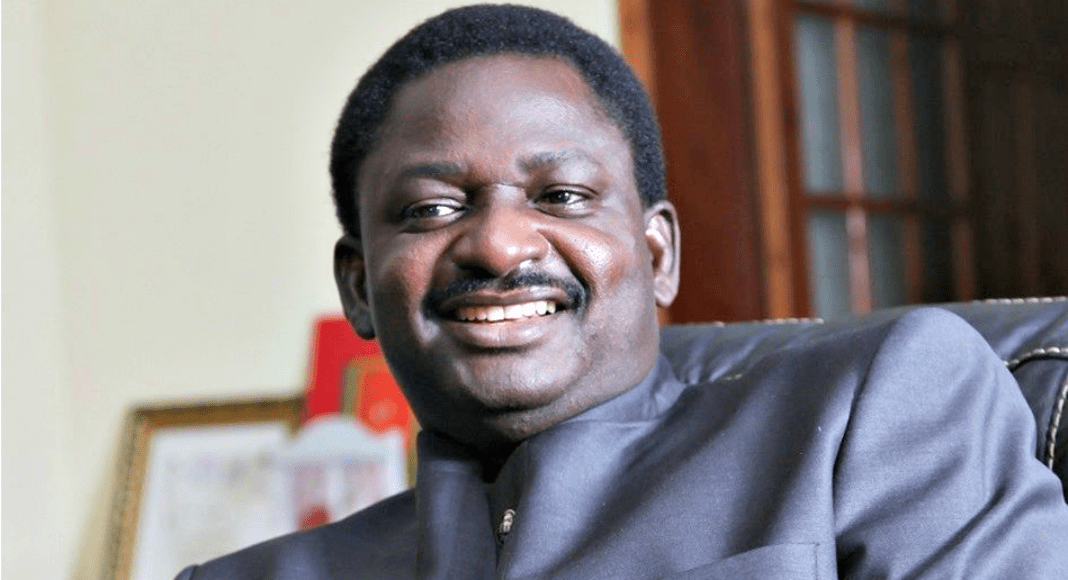 Special Adviser to the President on Media and Publicity, Femi Adesina has narrated how he stopped attending an Abuja church because the pastor was always attacking President Muhammadu Buhari.

In an article titled ‘This Kumuyi is simply different’, which was written in support of General Superintendent of the Deeper Christian Life Ministry, Pastor William Kumuyi’s insistence that “true believers shouldn’t disdain those in power because they appear not to be delivering on electoral pledges”, Adesina accused some pastors of turning their pulpits to soapboxes upon which they spew hatred and also encouraging people to burn government properties during the last #EndSARS protests because they “hate the fact that a Fulani man is their President.”

He also said that while a former Vice-Chancellor of Ajayi Crowther University, Prof. Dapo Asaju was within his rights to be angry over the state of the country, however the Buhari-led administration is doing a lot to change the nation’s fortunes.

THIS KUMUYI IS SIMPLY DIFFERENT

He rarely speaks on things that do not have to do with the work of the Kingdom, which he is completely sold out to, and has been engrossed in for over 50 years. In fact, he exemplifies the words of the prophet that “he shall not strive, nor cry; neither shall any man hear his voice in the streets.”

But someone stuck his fingers in the mouth of Pastor William Folorunsho Kumuyi, General Superintendent of the Deeper Christian Life Ministry, recently, and the man had to speak. He didn’t cry or strive, and “a bruised reed he did not break,” smoking flax he did not quench. But the cleric gave some home truths on what the attitude of a true Christian should be to secular government, particularly of his own country.

This was how it all happened. Professor Dapo Asaju, a cleric and academic, former Vice Chancellor of Ajayi Crowther University, had called out Pastor Kumuyi, and Pastor Enoch Adejare Adeboye, General Overseer of the Redeemed Christian Church of God (RCCG), telling them that it was not enough to just concentrate on their massive congregations, but that they must seek to meet President Muhammadu Buhari on the state of the nation, and tell him “enough is enough.”

Prof Asaju added: “All ministers of God must speak out…I (am) looking forward to Baba (Kumuyi) addressing a World Conference, with Baba Adeboye seated beside him. Let them call people and say enough is enough. They need to lead other people to convene a high-powered meeting with the President.” As if the two men of God had not met with the President at different times, where they counseled him, and prayed for the nation. They equally lead their congregations to do so, almost weekly.

If you read between the lines, the respected academic was vexed and exasperated with the security situation in the country, and its concomitant spin-offs. Who is not? Who will not be? Are things normal? Far from it. But is the government up and doing to turn things around for the people? Very much so. Then, is a subtle sponsoring of insurrection by ministers of God the next thing to do? Far from it. At least, for those who know the purpose of their call, and how they should comport themselves in a troubled polity. Like our Master, “a bruised reed shall he not break, and smoking flax shall he not quench, till he send forth judgment unto victory.” (Matthew 12:20).

Pastor Kumuyi last weekend responded to Prof Asaju through a statement titled ‘The Church and the Challenges of a Nation,’ which I recommend that all Christians should read, and which is also very instructive to non-Christians.

What is the purport and summary of what the Deeper Life G.S said? He noted that the concerns of Prof Asaju could not be dismissed, and the man must be seen as a patriot, but “at Deeper Christian Life Ministry, we are far more aware of the existential crossroads than many perceive.

“We present the Word of God as delivered in the Holy Bible, alright, but we warn that in the long run, the Lord is interested in a fusion of obedience to His Word and relating amicably with fellow human beings, regardless of class, color, caste (religion) or culture. We teach that if you genuinely believe in Christ, you wouldn’t hate your neighbor. Nor would you disdain those in power because they appear not to be delivering on electoral pledges such that you would go on the rampage, destroying government property or pilfering the public till. We teach a linear life of Christian walk: you can’t be a saint on Sunday and a monster on Monday.”

Profound. Earnest. Well said. Deep as in Deeper Life. Pastor Kumuyi, where have you been all our lives? Thank you, thank you for speaking out now. “If you genuinely believe in Christ, you wouldn’t hate your neighbor. Nor would you disdain those in power because they appear not to be delivering on electoral pledges such that you would go on the rampage, destroying government property…”

Profound, again I say, profound. But this is not what we hear from most preachers today. What we rather see is the pulpit being turned to a soapbox, where hatred is preached, where fake news is spread week after week, and where congregants are instigated against the leadership of the country. And I know what I am saying. I used to attend a church in Abuja from 2015 to 2018, till the pastor began to see himself as someone who must bring the Buhari government down. Sunday after Sunday, it was all sorts of criticism from the pulpit. But I endured, since it was branch of a church I had attended for over 30 years. Till one day, he overdid it. The Dapchi girls were abducted, and there was no name the pastor did not call President Buhari that Sunday. It was horrendous that such things could come from the pulpit. But I suffered long, and sat through the sermon, or rather, what was supposed to be a sermon. I then went home, wondering what the church of God was turning to.

If you recall, the Dapchi girls were recovered within a week, except for Leah Sharibu, and a few others. Awful, quite sad, but still there was cause for one to be thankful to God. So, the following Sunday, I went to that church, waiting to hear what the pastor would say, having excoriated and flagellated the government so badly the week before. I was dazed, nay, stunned. Throughout the sermon, not a word, not even a whisper about the recovered Dapchi girls. Bad faith. “If you are a genuine believer in Christ, you wouldn’t hate your neighbor. Nor would you disdain those in power…”

Pastor Kumuyi also says if you are a true believer in Christ, you wouldn’t go on the rampage, destroying government property…. But that was not what we saw in the country in October last year. The country was almost burned down under the subterfuge of EndSARS. And sadly, they were encouraged by pastors and preachers, who simply hate the fact that a Fulani man is their President. Many of them are on record as having encouraged the protesters, till things went ugly, turned awry. And the pastors vanished into the thin air. Not a word of caution or restraint as the cities were burning, and policemen were being killed, and even eaten up. “If you are a genuine believer in Christ, you wouldn’t…go on the rampage, destroying government property.”

Irrespective of the titles they bear, I hear Bishops, Apostles, Prophets, Pastors, Evangelists, cursing the government, and issuing doomsday notices. One even said publicly that the Buhari administration was over, before the 2019 elections. But the man won handsomely, and that preacher still struts and frets on the pulpit every week, not repenting in sackcloth and ashes. “If you are a genuine believer in Christ, you wouldn’t hate your neighbor. Nor would you disdain those in power…” Thank you, Pastor Kumuyi.

In his reply to Professor Asaju (please get the full text, and read) Pastor Kumuyi gave many instances on how God has intervened in the situations and circumstances of humanity through the works of the Deeper Christian Life Ministry, both within and outside the country. He then concluded: “I see more of the Lord’s focus on attending to the challenges of our nation and the countries of the world. I see Him containing the conflicts confronting His people as we pray in the name of Jesus.”

And I say amen. A resounding amen. That is the balanced perspective, the approach of a true man of God. That is the ancient landmark, which we must not shift or remove. We must “earnestly contend for the faith, which was once delivered unto the saints” (Jude, verse 3). But some would say Kumuyi is of the old school. And I say yes, the old school is the real school, and remains ever faithful, ever sure.