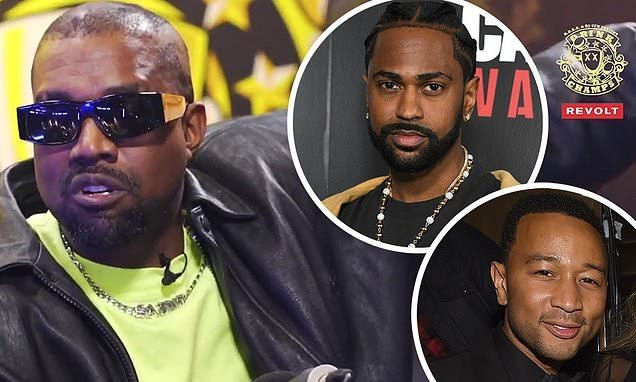 ‘The worst thing I ever did was sign Big Sean’

Rapper, producer and Fashion designer, Kanye West has hit out at his former artistes Big Sean and John Legend .

On Thursday night, November 4, Kanye West was a guest on the Revolt TV podcast Drink Champs where he told the show’s hosts N.O.R.E. and DJ EFN he doesn’t ‘rock with’ either of the artists.

It started after the show hosts asked Kanye who he prefers between Pusha T and Big Sean to which Kanye used the opportunity to blast Big Sean as well as John Legend, who he has worked with for the last two decades.

First, the Yeezy founder exclaimed: ‘I already decided that when I die, on my tombstone it’s gonna say, “I deserve to be here I signed Big Sean.”‘

The hosts didn’t quite understand what Kanye meant, and so he elaborated by adding, ‘I’m saying the worst thing I ever did was sign Big Sean.’

He was referring to signing the Detroit rapper to his music label G.O.O.D. Music, where he recently completed his contract.

West was angry that both men let themselves be used by Democrats to criticize his failed 2020 US presidential run.

Continuing to let out his frustrations, Kim Kardashian’s estranged husband noted about Big Sean, ‘I changed this man’s family.

‘And both John Legend and Big Sean, when I ran for office, got used quick by the Democrats to come at they boy that actually changed they life. And that’s some sellout sh**. And I don’t rock with neither of them and I need my ap ‘The worst thing I ever did was sign Big Sean. I changed their life’ – Kanye West dissociates from his former artistes Big Sean & John Legend for criticizing his 2020 presidential run