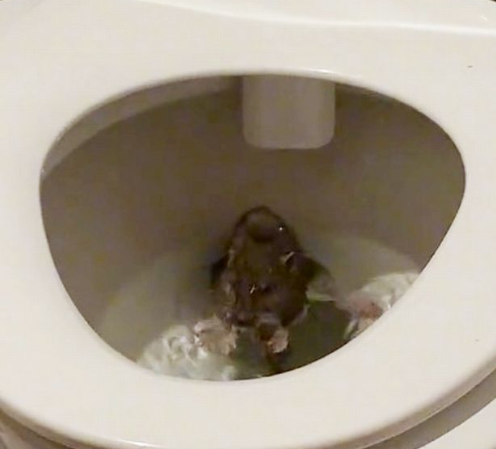 A woman was left surprised when a rat climbed up the drain in her New York City apartment and sat in her toilet bowl.

In a clip, shared on TikTok by the woman, the shivering rat is seen sitting in the toilet water and washing its face with his paws.

“Sir?” the woman asks the rat while giggling.

A man in the background jokes: “What a distinguished gentleman.”

The rat appears frightened and continues to sit in the water and looks as if it might be trapped.

The video has been watched more than 2 million times and racked up thousands of likes and comments as people suggest that the woman gets covers put in her drain to stop rats coming through.

Rats are known to climb up through drainpipes and even through toilet u bends because they are good swimmers and able to navigate the sewage systems.

There have also been cases where snakes climbed up toilet bowls.

Watch a video of the rat below.

Don’t be distracted by Yahoo boys, they will go to jail — Osinbajo tells Nigerian youths