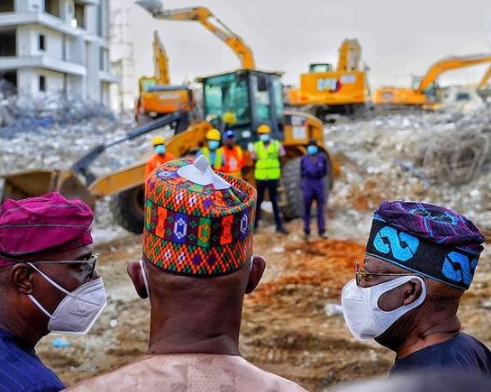 According to Sanwo-Olu, six people were discovered to have been rescued alive on the first day by first responders and taken to the police hospital before the arrival of LASEMA, bringing the total number of survivors to 15.

The governor visited the site on Saturday, November 6, in the company of APC National leader, Bola Tinubu and Governor Abdullahi Sule of Nasarawa state.

”I went back to the site today to assess the level of work being done, and to get an update on the search, recovery and evacuation of the victims of the unfortunate incident.

I went in company of the All Progressives Congress (APC) National Leader, Asiwaju Bola Ahmed Tinubu, and my colleague, Governor Abdullahi Sule of Nasarawa state.

An additional 6 people were discovered to have been rescued alive on the first day by first responders and taken to the police hospital before the arrival of LASEMA. This bumped up the number of people rescued alive to a total of 15, while we have sadly recovered 42 bodies so far.

In order to help survivors and families of the victims cushion the effect of the loss of their daily bread and the loss of their loved ones, we have set aside some money to assist in the burial arrangements, and for survivors to settle in and cope with challenges of feeding in the aftermath of the incident.

As at this morning, 49 families have filled a missing persons register, which has greatly helped us reconcile the details of victims rescued alive and also medically account for bodies recovered.
Identification of bodies by relatives has also commenced, and DNA examinations are being undertaken on some of the bodies difficult to be identified by families.

Though so much progress has been made on the site, and the heap has reduced significantly, search and recovery operations are still ongoing, and I assure you we won’t relent on our efforts until all missing persons have been accounted for.

May the souls of everyone who lost their lives on that site, and anywhere around the world Rest In Peace. Amen.”