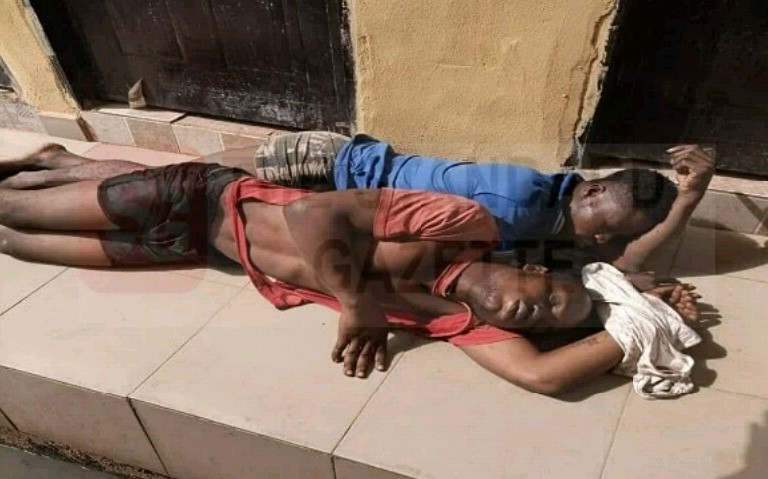 Two suspected kidnappers who allegedly abducted a businessman were beaten to stupor by an angry mob in Benin City, Edo State

It was gathered that the suspects, Efosa Osawaru, David Ayobami and another suspect at large, stormed a house in Ugbowo area of Benin City on Saturday, November 6 and abducted a businessman.

The businessman, whose name is not mentioned for security reasons, was abducted while driving out of his compound.

The kidnappers shot sporadically, forcing the victim to stop before he was dragged into the booth of his Toyota Corrola car and drove off.

The kidnapped victim opened the booth and jumped out of the moving vehicle before raising the alarm which attracted the attention of passersby.

The mob apprehended two of the suspects, beat them to stupor before handing them over to the police.

One of the suspects, Efosa Osawaru, who spoke with Standard Gazette, said that his gang has been monitoring the victim.

“I was called by my friend to come to Uselu in Benin city to join him to kidnap a man so that we can make money. He brought a gun, and we actually went to kidnap the man in his house. We have monitored the man and discovered that it would be easy to kidnap him in the morning. We carried the man and put him in the booth of his own car while my friend collected the car key and drove off with him.”

The second suspect, David Ayobami, said, “We have other members of our gang that were already waiting for us at Oluku, and we were to hand the victim over to them for ransom talk with the family members. We then ran into traffic during the movement. That was how the man forced the car booth open and shouted for help. The people in the area almost killed us. I regret this kidnapping.”

Spokesperson of the State Police Command, SP Bello Kontongs, who confirmed the incident said the two suspects were beaten to stupor before the arrival of the police.

“We are making efforts to ensure the arrest of one of the accomplices now at large.” he added.