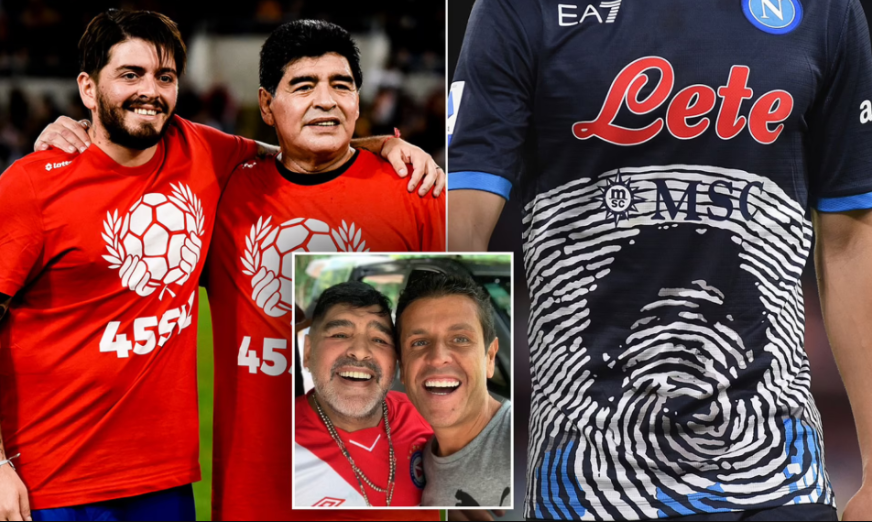 The family of Diego Maradona are taking legal action against his former manager Stefano Ceci after he gave Napoli permission to use the Argentina legend’s imagery on their new kit without their permission.

Last week, Napoli unveiled a new kit that they will wear in Serie A to pay tribute to Maradona, one year after his death.

Maradona died from a heart attack in Tigre, Argentina, on November 25, 2020, aged just 60. And to mark the occasion this month, the Serie A outfit released a new shirt paying homage to their greatest-ever player.

The shirt made its debut during Sunday’s 1-1 home draw with Hellas Verona and will also be worn at Inter Milan on November 21 and at home against Lazio a week later.

‘The authorization was signed by Stefano Ceci, who was my dad’s manager, but now he is no longer and we heirs are the only deputies to sign this type of authorisation,’ he told Italian outfit Adnkronos.

‘A contract that no longer exists has been found to be valid and we will therefore take legal action. It is strange that a serious club-like football Napoli has given credit to this person.

‘The shirt in honour of father is a source of pride but I am sorry for the lack of consideration on the part of Napoli, we legitimate heirs have not been involved and have never given consent to this operation’.

Ceci, Maradona’s long-time friend, and former manager, was born and raised in Naples. He grew up idolizing Maradona, who inspired Napoli to their only two Serie A titles and UEFA Cup triumph.