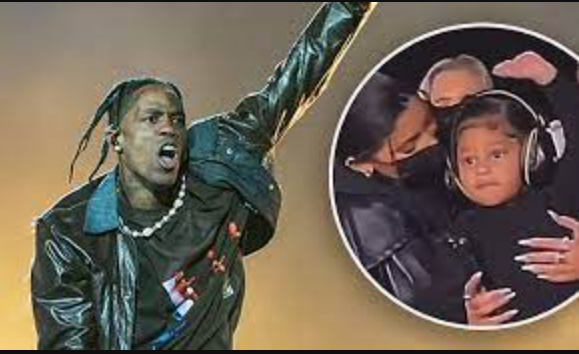 Travis Scott and Kylie Jenner have been slammed online for taking their daughter Stormi to the rapper’s Astroworld festival, which turned deadly.

A total of eight people died and hundreds of others were injured when a crowd surged toward the festival’s stage during the rapper’s performance last Friday night at NRG Park.

In footage shared online, the reality TV star and billionaire beauty mogul holding her daughter while in the VIP section, alongside her sister Kendall Jenner.

The couple have been branded ‘irresponsible’ for taking their daughter to the event in the first place, given the history of chaos at Scott’s shows.

One user @redtapeIdiot wrote: ‘Seeing that Travis Scott actually brought his daughter to the concert when he knows that the crowd gets hectic sometimes and he encourages people to “rage” is insane. Stormi probably ended up seeing people pass out or die or get injured bc of her dad. #astroworld’

Another, @zabbpinkless, added: ‘so no one is talking about the fact that Stormi attended astroworld fest, an event where most know what happened. It is so irresponsible of Travis and Kylie to bring a minor to these types of events. she’s just a baby i mean. what’s the need to be involving her?’

A user with the handle @htxmarieee wrote: ‘travis scott and kylie jenner taking stormi to astroworld still doesn’t sit right with me.’

John Hilgert, Brianna Rodriguez, Rudy Peña, Franco Patino, Danish Baig, Madison Dubiski, Axel Acosta, and one more yet to be identified were all killed during the stampede at the festival.

The ‘mass casualty’ event occurred when fans rushed towards the stage shortly after Travis began performing his 9:06-10:34pm headlining set.