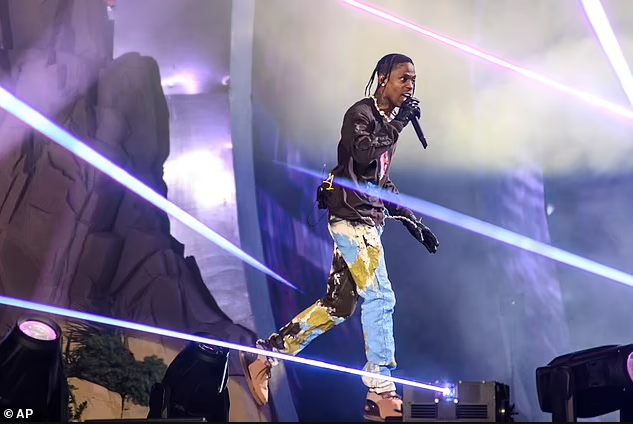 Investigators are looking into whether a bad batch of illegal drugs laced with fentanyl might have played a role in the deadly concert surge at Travis Scott’s Astroworld Festival.

This comes after it was revealed that multiple unconscious concertgoers were revived with the overdose-reversing drug naloxone.

Eight people died, all between the ages of 14 and 24, and hundreds more were injured in the crowd on Friday in Houston, Texas after a sizable group of the 50,000 in attendance pushed toward the stage at NRG Park as a timer clicked down to the start of the performance.

Police are still trying to determine whether any of the deaths occurred during the surge or if other factors later came into play, such as accidental fatal overdoses, a source close to the investigation told the Wall Street Journal.

‘There are potential scenarios that are being looked into, including malicious attacks and laced pills,’ the source told the outlet, noting that authorities have launched a criminal homicide and narcotics investigation.

Houston Police Chief Troy Finner said during a press conference following the event that at least one person was involuntarily drugged. He explained that a security guard felt something to his neck and immediately fell unconscious while he was trying to restrain somebody else.

‘He was reaching over to restrain or grab a citizen and he felt a prick in his neck. He went unconscious, they administered Narcan. He was revived, and medical staff did notice a prick similar to a prick you would get if somebody was trying to inject,’ Finner said.

‘I think that all of us need to be respectful of the families and make sure we follow the facts and the evidence. And that’s what we’re trying to do here in the Houston Police Department. I will tell you one of the narratives was that someone was injecting other people with drugs.’

Finner referred to initial reports that a crazed man with a needle was injecting people in the crowd, directly leading to the stampede and deaths. But an off-duty nurse, who fainted and was crowd-surfed to the stage during the show, pushed back on such claims.

‘This is a lie. They trying to cover their asses. Nobody who actually was there has said this s**t. Nobody saw this s**t,’ Madeline Eskins wrote on