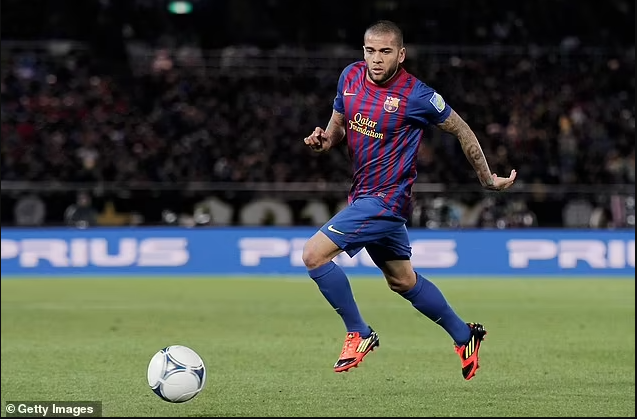 Barcelona are looking at the possibility of re-signing club legend Dani Alves in what would be a reunion with former team-mate turned manager Xavi.

The Brazilian veteran full-back Alves won a host of major trophies during his first spell at the club after signing in 2008 before departing in 2016 to join Juventus.

He is now a free agent, however, and according to journalist Nicolo Schira, discussions between Alves and Barcelona are ongoing over a potential return.

It was reported that Nou Camp chiefs initially ruled out the move, but after Xavi was unveiled as the new Barcelona coach, Alves would serve as a leader under him.

A meeting is scheduled to hold over the coming days to make a final decision on whether the 38-year-old veteran comes back for a second stint.

He has confirmed that he has informed Barcelona about his willingness to play for them again, saying: ‘It would be taking advantage a bit to say now Barca need me.

‘I left saying that when Barca needed and wanted me I would return regardless of where I was.

‘There’s too much love, respect and care I have for this home. If Barca think they need me all they need to do is call.

‘I believe I can add things wherever I go but at Barca now especially with the youngsters they have.

‘We were young once and we weren’t prepared to defend a responsibility as big as defending Barca is, no matter how good they are or how much they are spoken about. It’s all new.

‘You need a mix of young and old to give balance and the chance to fight for great things.’

Laporta is also open to the return. He said: ‘Dani Alves helped the club in a number of ways – and he has offered us his help from a sporting point of view as well.

‘Like with (former captain Carles) Puyol, there is a very direct relationship. They can help if Xavi needs it.’