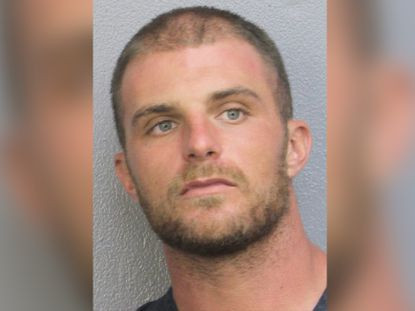 Man bags 10 years imprisonment after pleading guilty to stabbing dog more than 50 times, 4 years after saying he was innocent

A man accused of stabbing a pit bull dog more than 50 times, and then trapping his body in a suitcase is now pleading guilty, four years after he said he was innocent.

In October 2017 a stabbed and badly bruised dog named Ollie was found stuffed inside a blue suitcase near Hollywood, Florida by a couple who had gone out for a late-night walk.

They called the police, and the dog was turned over to Grateful Paws Dog & Cat Rescue.

The crime went viral as outraged animal lovers across the globe criticized the action. A GoFundMe page raised more than $40,000 to help with the dog’s care, but Ollie didn’t survive and died of cardiac arrest two days later.

After he died, the money was added to a reward used to help locate his attacker, which totaled nearly $60,000 — including $31,800 from anonymous donors.

Later in 2017 Hollywood police arrested Evans in November of that year, after linking his DNA to the suitcase.

“There were also kittens & rats who were tortured [in the apartment] and never made it out,” according to “Justice for Ollie,” a Facebook page created to bring the perpetrator to justice.

Evans, who was 31 at the time, was charged with aggravated animal cruelty. He’s been behind bars since Nov. 15, 2017.

He was initially charged with 17 counts of animal cruelty but 15 counts were dismissed in exchange for the guilty plea, according to Gottlieb.

On Friday he has a different hearing related to another case, a probation violation in Hernando County, for which he faces up to 15 years.

Mindy Moffatt, the animal rights activist behind “Justice for Ollie” wrote on Facebook Tuesday that she hopes that “the other case gives him more time on top of this charge because he needs to remain in prison for a very long time!”

“It scares me to think of the day he walks free,” she added.