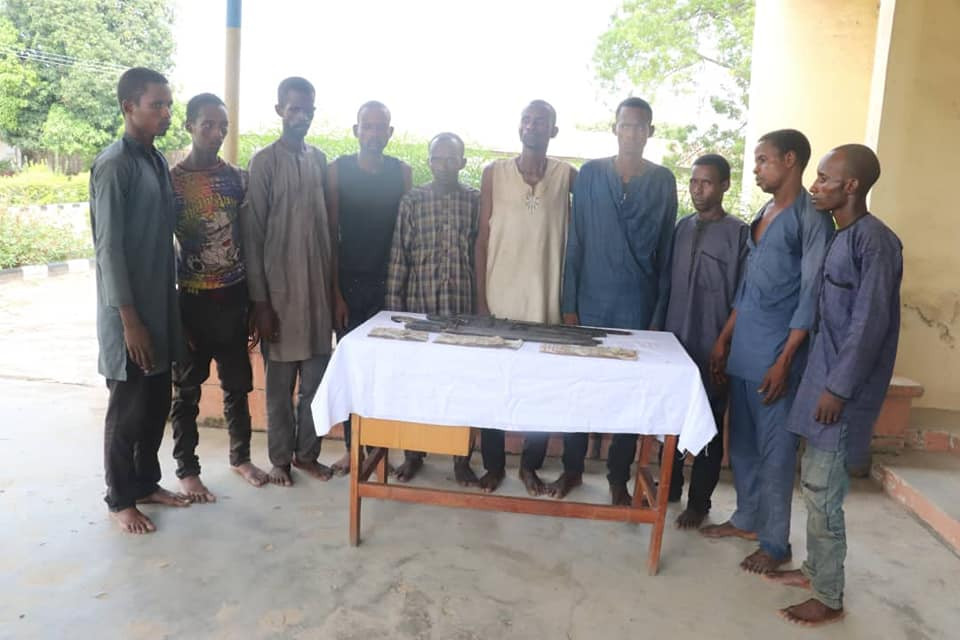 The Niger State Police Command has arrested 15 suspected kidnappers and seven others for various offences.

“On 09/11/2021 at about 0730hrs, information was received that suspected gunmen blocked Bangi-Mangoro road, intercepted two commercial vehicles conveying passengers from Mangoro village to Bangi market and abducted fifteen people from the two vehicles,” the PPRO stated.

“Upon receipt of this information, the Command mobilized the Police tactical teams in conjunction with the military and vigilante to the scene, and as a result of the combined joint security team effort, the fifteen victims were rescued unhurt while effort is ongoing to arrest the fleeing bandits,” he added.

“On 06/11/2021 at about 2230hrs, information was received from a credible source that on 05/11/2021 at about 2100hrs, suspected gunmen invaded Sonfada village, Lapai and abducted two victims to Sonfada forest via Lapai,”

“On receipt of the information, a joint Police/Vigilantes team from Lapai Division were immediately mobilized to the forest and after a chase and sustained operational pressure on the hoodlums, the two victims were rescued unhurt while the following ten (10) suspects were arrested at the forest with recovery of about five hundred (500) suspected rustled cattle in their possession,”

The suspects were equally arrested with two Bajaj motorcycles, a sum of two hundred and seventy thousand naira and five cutlasses. During interrogation, the suspects claimed to have reared their cattles to Sonfada forest from their different locations. Case under investigation.

The PPRO said that two suspected kidnappers and human trafficker, Samaila Makeri Auna and Musa Umar, were by police operatives in Nasko.

“On 03/11/2021 at about 0400hrs, a complainant reported at Nasko Division in Magama LGA that he received an anonymous letter demanding for a sum of four million naira and failure to comply will attract his kidnap. On 07/11/2021, based on a tip off, Police operatives attached to Nasko Division arrested the suspect,” the statement read.

During interrogation, the two suspects confessed to the crime and other kidnapping escapades, while in another development, one of the suspects; Samaila Makeri also confessed being a human trafficker as he had trafficked over thirty (30) teenagers from Kebi and Niger States to Kwara and Oyo States respectively. The case is under investigation.

“Earlier, on 01/10/2021 at about 0830hrs, based on a tip off whereby a victim of kidnapping sighted one of the suspect at Ibeto market and reasonably identified the suspect. The Police operatives of same Division (Nasko) swung in to action and apprehend the suspect, one Abubakar Aliyu age 32yrs ‘m’ of Bukuyo LGA Zamfara State

“During interrogation, the suspect confessed that on 6th and 26th September, 2021 at about 0200hrs, he conspired with his gang members who are Baleri, Abubakar, Legbo, Ezekiel and Kanina all presently at large armed with AK 47 rifle and kidnapped two victims from their homes at Magama-Daji and Erena villages in Magama and Shiroro LGAs respectively in which ransom of N8m was collected before the victims were released.

He confessed further that on 28/9/2021 at about 0200hrs, he conspired with two others, namely: Tambaya Abubakar age 30yrs and Mohammed Dengi age 37yrs both ‘m’ of Erena and Marafu villages with other gang members mentioned above and attacked the victim who sighted him in the market and kidnapped his wife in Nasko. A ransom of N1.2M was collected before she regained her freedom.

However, Abubakar Aliyu, Tambaya Abubakar and Mohammed Dengi were arrested and a sum of hundred thousand naira was recovered from the said Aliyu as part of his share from the ransom. Case under investigation as effort is ongoing to apprehend other fleeing members.

ARREST OF A SUSPECTED TANKER VEHICLE SNATCHER. On 8/11/2021 at about 0300hrs, a gang of armed robbers who specialize in snatching tanker trucks loaded with petroleum products, snatched a tanker truck with Reg, No. GME 701 XA loaded with 40,000 litres of premium motor spirit (PMS) travelling from Lagos to Gombe State.

The tanker truck was snatched along Agaie/Lapai road where the armed suspects emerged from the forest with a Golf vehicle and accosted the driver of the truck and his motor boy into their Golf vehicle while the truck was driven away by one of the suspect by name Gambo Haruna ’m’ of Rigasa area Kaduna.

Consequently, irate mob mobilized to lynch the suspect who drove the truck while he was immediately rescued, apprehended and taken to hospital for medical attention.

The two victims were later abandoned in the forest by the hoodlums and subsequently rescued. Effort is ongoingto arrest other members of the gang as the case is under investigation.

ARREST OF TWO (2) SUSPECTS FOR CRIMINAL CONSPIRACY AND ARMED ROBBERY/RECOVERY OF ARM.

On 29/10/2021 at about 0200hrs, based on information received from a reliable source that fiveman gang armed robbers invaded a mining site at Paimasa village via Katcha LGA and robbed a victim with machete cut injury inflicted on him.

He was robbed of his mining stones valued about six hundred thousand naira and a cash sum of nine hundred thousand naira. On receipt of the information, Police operatives attached to Kataeregi Division swung in to action and arrested the two following suspects; Mamman Sani Lawali age 27 ‘m’ of Jazu village via Paikoro LGA and Mohammed Ibrahim age 32yrs ‘m’ of Mikugi village via Katcha LGA.

While three other member of the gang took to their heels and escaped. During interrogation, the two suspects confessed to the crime and one dane gun was recovered in their possession. Case under investigation as effort is ongoing to apprehend the fleeing suspects.