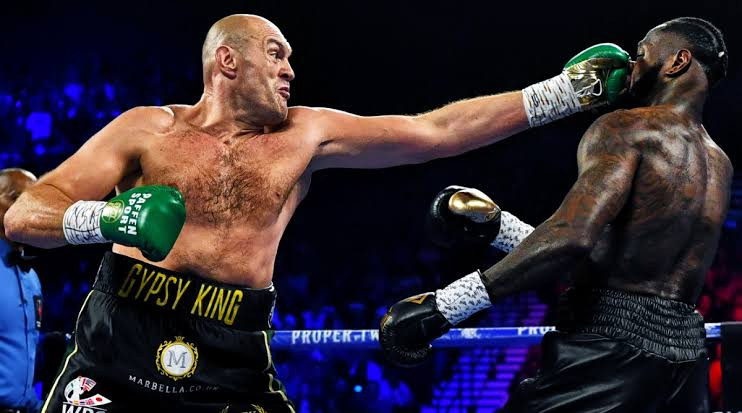 According to John, a former boxer himself,  Tyson was carrying serious injuries into the fight, had just three-and-a-half weeks of full training and after the fight had to undergo a six-hour surgery on his elbows .

Tyson also known as the Gypsy King ended his long-term rivalry with Wilder in ruthless fashion, surviving two heavy knockdowns before knocking out the American in the 11th round of their fight.

Fury, who made the first defence of his WBC belt with the victory, once again abandoned his more customary box-and-move style, instead taking the fight to Wilder.

Wilder received praise for his courageous performance to keep fighting despite falling to a second successive defeat, but John Fury insists the American was simply up against a totally unfit opponent.

‘It wasn’t a boxing match was it. Tyson was very badly injured going into that fight,’ John Fury told BT Sport Boxing.

‘He had to have chromosome injections into both elbows. He’s since had an operation, six hours all day in hospital having them sorted out.

‘I think he had some bone spurs that he had to get removed, he was handicapped from the beginning. The boxing side of it went out the window because I knew he was going to be like that from early on.

‘When I seen the look on his eye, I just knew he wanted to seek and destroy. That’s what he did and believe me, it was exciting for the paying public, probably one of the most exciting fights you’ll see.

‘But boxing wise, he didn’t do nothing he trained on. They couldn’t have trained for that, could they?’

Elbow injuries weren’t the only drastic issues facing Fury in the build-up to the event, as he also tested positive for Covid in July, when the fight was initially scheduled to take place.

Subsequently in August, Fury welcomed a sixth child into his family as his wife, Paris, gave birth to a baby girl, Athena.

Fury nearly lost his daughter, who was placed into an intensive care unit following her birth.  Due to the health issues of his daughter, Fury delayed his training camp to be with his family, and John Fury has revealed his son was not just in the right place mentally and physically leading up to the fight.

‘To be honest, I think he only had about three-and-a-half weeks to train for it,’ Fury added. ‘When I was in hospital in Liverpool with him, he couldn’t have been any lower.

‘To go from there four weeks later and do what he did, he’s moving mountains this man. Was he fit? No, not at all.

‘I wasn’t going to say anything different, I was saying: “You’ve done this, you’ve done that, son.”

‘I was trying to be positive. But in my mind I knew that truth that he was only 50 per cent of what he should be because he had too many problems. He had Covid in July when it was first meant to take place, then he had problems with his daughter.

‘You can’t get your head straight from that within weeks – and that’s what he did. To perform like he did?

‘I could see it was ring-rust, 20 months out the ring and he thought: “To hell with the boxing, it’s not going to work, let’s have it, let’s have a war.” It was a thrilling affair, but it shortens careers, doesn’t it?’