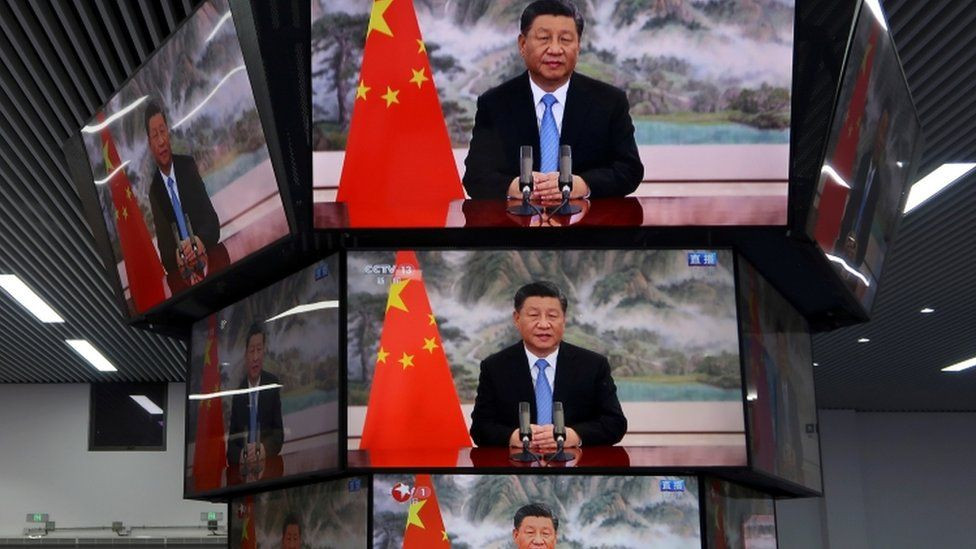 The Chinese communist party on Thursday, November 11 held a key meeting where they approved a rare “historical resolution” that will ensure Chinese leader, Xi Jinping stays in power for the rest of his life.

According to the official Xinhua news agency, the landmark resolution places Xi alongside former leaders Mao Zedong and Deng Xiaoping.

With the resolution, Xi Jinping joins the two other leaders as the only leaders to have presided over such a resolution in the party’s 100 year history.

Experts say the “historical resolution” will pave the way for Xi, 68, to secure an unprecedented third term in office next year — and potentially rule China for life.

The move came at the end of the closely-watched sixth plenary session of the party’s Central Committee, a mostly male group of more than 300 top leaders. It is the last major meeting before a party congress next year .

He is only the third leader to have a historical resolution adopted during his presidency, after Mao and Deng.

Xi’s political philosophy — called “Xi Jinping Thought” — is already being interwoven into Chinese society, added to educational textbooks from primary school to college. The historical resolution will further entrench his personal leadership as the defining characteristic of Chinese politics for years and possibly decades to come.

The resolution is Xi’s “attempt to further consolidate his power and to define his historical legacy in the history of the party,” said Jinghan Zeng, a professor of China and international studies at Lancaster University in Britain ahead of the plenum.

Weeks before the meeting, state media praise for Xi was more effusive than usual.

An article in People’s Daily, the party’s flagship newspaper, called Xi’s leadership the “most critical condition in the face of major historical junctures and tests.”

Safeguarding Xi’s “core position” and the party’s overall authority, it said, were “the fundamental guarantees for winning new victories” in China’s modernization drive.

Former leaders Mao and Deng both used their historical resolutions to criticize what had come before: Mao, in 1945, asserting his dominance as ruler at the birth of communist China, and Deng, in 1981, carefully criticizing Mao’s mistakes and paving the way for greater economic liberalization.

Xi’s resolution is expected to be more about praising what Chinese state media has called “the major achievements and historical experiences” of the party’s 100-year rule — and by extension the past decade with him in charge.

That includes the Mao era, which Xi has previously defended despite the millions of people who died of starvation in the Great Leap Forward, Mao’s disastrous attempt in the late 1950s and early 1960s to rapidly industrialize Chinese society, and the brutal purges of the 1966-1976 Cultural Revolution.

“Sixth plenums are not usually necessarily the most important annual meetings of the Communist Party,” said Steve Tsang, a professor and director of the China Institute at SOAS University of London. “But this particular sixth plenum is very, very important indeed.”

“The only thing that can stop Xi now is internal resistance within the upper echelons of the party, if he stumbles or makes some other big mistake,” he said.

These plans come amid China’s surging power internationally. The country is set to become the world’s largest economy within a decade. Its coal consumption will determine the global fight against climate change. And it remains locked with the United States in disputes over everything from trade and intellectual property to human rights and the status of Taiwan.