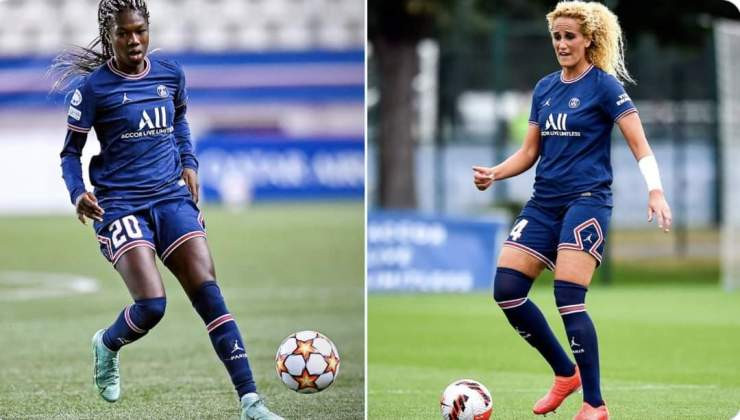 Five Paris Saint-Germain Women players were reportedly given security guards after receiving threatening phone calls in the days before one of them was brutally beaten.

Victim Kheira Hamraoui, 31, was allegedly among players given guards, as was Aminata Diallo, 26, who is now under arrest accused of orchestrating the attack.

The calls reportedly began in late October, days before Hamraoui was dragged from a car on the night of November 4 by two men who beat her legs with iron bars.

Police have since arrested a 34-year-old man, a childhood friend of Diallo’s who is already in jail for racketeering, on suspicion of making the calls from behind bars.

It was gathered that authorities are working on the theory that Diallo hired goons to put her talented rival out of action so she could take her place in PSG’s team.

According to the L’Equipe newspaper, the caller claimed to be a married man from Barcelona who had a years-long affair with Hamraoui while she was playing in the city while accusing her of ruining his life and vowing revenge.

While it appears the calls were designed as a cover story for the eventual beating, L’Equipe says they actually turned police suspicion on Hamraoui’s teammates after the caller gave away personal details that only someone close to her could have known.

Diallo has yet to be charged and remains in custody where she has reportedly denied the allegations during police interviews.

Her stay in custody has been extended until Friday when she could make her first court appearance.

The 34-year-old man, reportedly born in Grenoble where Diallo grew up and who played as a junior for Olympique Lyonnais, has also yet to be charged but is thought to have denied the allegations against him.

Hamraoui remains under guard, news site RMC Sport reports, with security posted both inside and outside of her home.

Diallo is being guarded by police in jail, while it is unclear whether the three other players who received calls still have security details.

Police have yet to identify the masked men who carried out the beating.

News of the phone-calls came as new details about the night Hamraoui was attacked emerged in local press.

Hours before the attack took place, all PSG players and staff had attended a ‘bonding’ inner at posh restaurant Le Chalet des Iles, located on an island in the Bois de Boulogne, Paris.

After the meal Diallo had offered to drive Hamraoui and another player – Sakina Karchaoui – home to the nearby department of Yvelines, where all three live.

Diallo had just dropped Karchaoui off at her home around 10.30pm when the masked attackers approached the car and dragged Hamraoui out.

One of them allegedly shouted abuse at Hamraoui and beat her legs with an iron bar, while the other ‘detained’ Diallo but did not harm her.

The attack lasted ‘a few minutes’ before both of the men fled.

Hamraoui immediately contacted the head of security at PSG and the team’s assistant coach before going to hospital, where she received stitches.

She then missed team training sessions and an important Champions League match against Real Madrid on Tuesday night – with Diallo starting in her place.

At 6 am the morning after the match, Diallo was arrested at her home in Marly-le-Roi and taken into police custody.

Before the attack, Hamraoui and Diallo were said to be good friends – holidaying together on numerous occasions, including in 2019 to console each-other on being missed out of the French national squad during a home World Cup.

IPOB orders arrest of anyone enforcing Monday sit-at-home enforcers, insist the order has been lifted