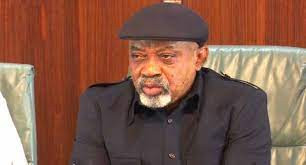 The Minister of Labour and Employment,  Chris Ngige, has proposed that medical personnel including doctors trained by the government should be made to serve the country for at least nine years before they can consider relocating to another country.

Ngige said this on Wednesday, November 10, while speaking at the 2022 Budget Defence of his Ministry at the House of Representatives.

Thousands of Nigerian medical practitioners every year relocate to other countries where they would offer their services for better remuneration and working conditions.

Speaking on the brain drain during the budget defence, Ngige said to check the alarming brain drain, medical workers trained by the government should be made to sign a bond that would ensure they do not leave the country at will after receiving training for free at public expense.

“Medical education in Nigeria is almost free. Where else in the world is it free? The Presidential Committee on Health should come with a proposal for bonding doctors, nurses, medical laboratory scientists and other health workers, so that they don’t just carry their bags and walk out of their country at will when they were trained at no cost.

In London, it is 45,000 pounds a session for medical education in cheap in universities. If you go to Edinburgh or Oxford, you pay 80,000 dollars. If you go to USA you pay 45,000 dollars but if you go to the Ivy leagues, you pay 90,000 dollars for only tuition, excluding lodging. You do it for six years. So, people in America take loans.

We can make provisions for loans and you pay back. If the government will train you for free, we should bond you. You serve the country for nine years before you go anywhere” he said