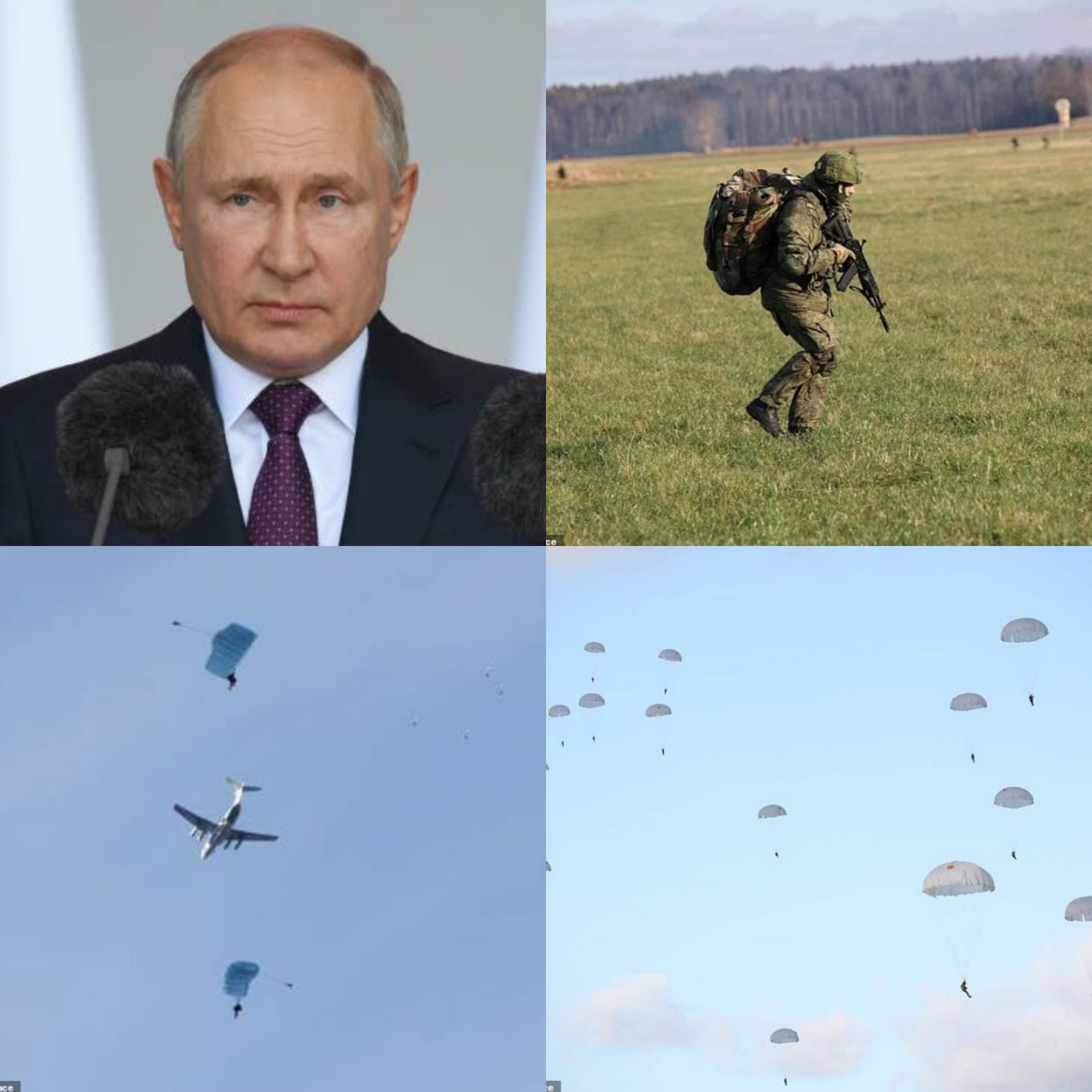 The White House has warned that Russia president, Vladimir Putin is preparing for an invasion of eastern Ukraine as Russia deploys soldiers in Belarus just a few miles from the Polish border on Friday, November 12, while the UK Royal Airforce intercepted Russian nuclear capable bombers over the North Sea.

This comes as Poland and Belarus engage in a face off with 15,000 Polish and NATO soldiers on the border with Belarus after the EU and US accused Belarus dictator Lukashenko of sponsoring a border crises with immigrants to punish the West for crippling sanctions on its economy for human rights abuses.

In a Friday statement , Russia’s defence ministry said the unannounced drill with Belarus involved paratroopers from both countries dropping at the Gozhsky range, just 20 miles from where thousands of migrants are gathered at the Polish border.

Both countries soldiers practiced ‘capturing bridges as well as hunting down and destroying enemy patrols’.

At the same time, Polish defence minister Mariusz B?aszczak revealed that British military engineers have been deployed to help strengthen the border defences, amid warnings from all sides that the crisis risks spilling over into an armed conflict.

Amidst the tensions, RAF Typhoon jets were also scrambled to escort two Russian nuclear-capable bombers which flew over the North Sea and towards the English Channel on Friday.

Also on Thursday, two supersonic Tu-22M3 nuclear bombers were seen performing ‘tasks of combat alert for air defense’ in support of the Belarus leader, the Russian defense ministry said in response to the rising tensions on the border.

This comes as Russia president, Vladimir Putin prepares for an invasion of Ukraine’s eastern borders -hundreds of miles from where the migrant crisis between Poland and Belarus is playing out .

US intelligence say their satellites have spotted Russian troops, tanks and artillery pieces spotted on the Eastern borders of Ukraine – which has been fighting a proxy-war against Russian-backed separatists in its eastern regions for years.

Ukraine in response to the US warnings has moved 8,500 more troops to the region in response.  Back in 2014 Russia annexed Crimea a part of Eastern Ukraine and since then have claimed it as their territory.

Concerns about Russian troops on Ukraine’s border have been ongoing since at least April this year, when Putin moved around 100,000 soldiers, tanks and artillery pieces to the region without warning.

Addressing the ongoing military crisis brewing, Kremlin spokesman Dmitry Peskov denounced what he called ‘increased provocations’ against Russia, saying his country ‘can’t stay indifferent to that; we must be on our guard.’

‘We take measures to ensure our security when opponents take defiant action near our borders,’ Peskov added.

Sergei Shoigu, Russia’s defence minister, warned his French counterparts that the military situation in Europe ‘continues to deteriorate’ while slamming NATO for ‘building up its military presence’ near Russia’s border.

Speaking after a meeting with French officials in Paris, Shoigu insisted that Russia is working to ‘increase predictability and reduce the risk of incidents’ in the border region.

Tobias Elwood, chairman of the UK Commons Defence Committee, said: ‘Russia and Belarus’s aggression in Eastern Europe is not mutually exclusive and should deeply concern the West.

‘It’s a test of our collective resolve. If we are not resolute in our support for Poland and Ukraine then authoritarianism wins and we invite further destabilising adventurism.’

NATO said on Friday it is looking out for any escalation in the situation on its members’ borders with Belarus, after Belarusian and Russian paratroopers staged joint drills near the Polish and Lithuanian borders.

‘We will remain vigilant against the risk of further escalation and provocation by Belarus at its borders with Poland, Lithuania, and Latvia, and will continue to monitor the implications for the security of the alliance,’ the North Atlantic Council, representing the alliance’s member states, said in a statement.

‘NATO allies call on Belarus to cease these actions, to respect human rights and fundamental freedoms, and to abide by international law.’