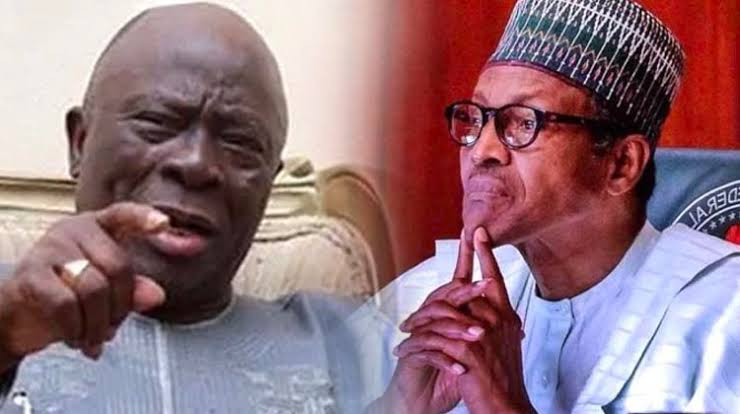 The Nigerian state that was negotiated before independence in 1960 is long dead.

Pan-Yoruba socio-political group, Afenifere, has stated that the structure of Nigeria must be renegotiated as the Nigerian state that was negotiated before independence in 1960 is dead.

According to the group, President Muhammadu Buhari’s pampering of terrorists keeps plaguing the country .

It said Islamic cleric, Ahmed Gumi, who has been canvassing amnesty for the bandits is only re-echoing the same views held by Buhari before he became president.

Speaking in Lagos at a press conference with the theme: ‘Fixing Nigeria, Before the Fall’, on Thursday, November 11, the groups leader, Ayo Adebanjo said:

“The entire country is burning. The North East was already aflame before the coming of Buhari, its peoples rendered as pawns in the power games of the northern elite, who allowed Boko Haram to fester, indeed, Buhari protested about the onslaught on Boko haram, and for those who might have paid attention, Gumi’s interventions are merely aping what Buhari used to say before he gained office in 2015. But what used to be confined to the North East, has today become a pan Nigerian.

“Buhari regime has treated them with kids gloves, and have blithely labelled them as bandits, businessmen, vandals, and even recently as area boys. Train track bombers, who were clearly intent on the derailment of a passenger train, are labelled as vandals in a clear advertisement of the complicity of the Buhari regime in the terrorist, led insurgency, ravaging Nigeria.”

“Retired Navy commodore Kunle Olawunmi is on record as saying the security services had submitted a report to Buhari since 2017 and that a list of the names of the major sponsors of terrorism in Nigeria is one of the several pieces of information in that file. Several of these positively identified terrorists and terrorist sponsors, are today in government at the highest level, and many more are serving senators and governors.”

The group also said Nigeria negotiated and agreed to by the founding fathers had died.

“To be sure, the Nigerian state that was negotiated before independence in 1960, the one that was birthed and named on  October 1, 1960, is long dead. It was mortally wounded in January 1966 and was then slaughtered in July of 1966. Its funereal obsequies were held between 1966 and 1970. The Frankenstein that was cobbled together in place of the dead nation that was agreed, has survived this long on the back of repression, lies, illusions, and outright delusions.

“But Buhari has finally killed it by his endless arrogance, the manifest incompetence, and the vile ethno-religious agenda, with which he is dangerously strangling the insufferable Frankenstein.”