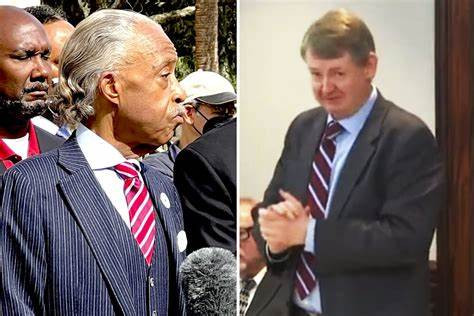 Kevin Gough, Lawyer of the White man who is accused of killing Ahmaud Arbery has complained to the trial judge that “black pastors” coming to court and sitting with the family is unfair.

Kevin Gough represents William “Roddie” Bryan, who along with father and son Greg and Travis McMichael is charged with murder and other crimes in Arbery’s Feb. 23, 2020, killing. The 25-year-old Black man was chased and fatally shot after the defendants spotted him running in their neighborhood outside the Georgia port city of Brunswick.

The lawyer expressed his displeasure in open court after activist, Rev. Al Sharpton showed up to sit with Arbery’s family inside the courtroom.

“I’ve got nothing personally against Mr. Sharpton … but if we’re starting a precedent where we’re gonna bring high-profile members of the African-American community into the courtroom to sit with the family during the trial in the presence of the jury, I believe that’s intimidating and it’s an attempt to consciously or unconsciously pressure or influence the jury.

” … if their pastor is Al Sharpton right now, that’s fine, but then that’s it. We don’t want any more black pastors coming in here. Jesse Jackson, whoever was in here earlier this week sitting with the victim’s family trying to influence the jury in this case.”

It was however learnt that Jesse Jackson was never in the courtroom. It is speculated that he was referring to attorney Ben Crump, who was in court earlier in the week.

The Judge was however less than receptive, interrupting Gough and shutting down his argument, after the lawyer makes a Colonel Sanders reference.

Sharpton had held a prayer vigil and news conference outside the Glynn County courthouse on Wednesday afternoon to show support for Arbery’s family. Afterward he joined Arbery’s parents and their lawyers to listen to portions of the trial testimony.

Sharpton said in a statement that Gough’s remarks showed “arrogant insensitivity.” “I respect the defense attorney doing his job,” the activist said, “but this is beyond defending your client, it is insulting the family of the victim.”