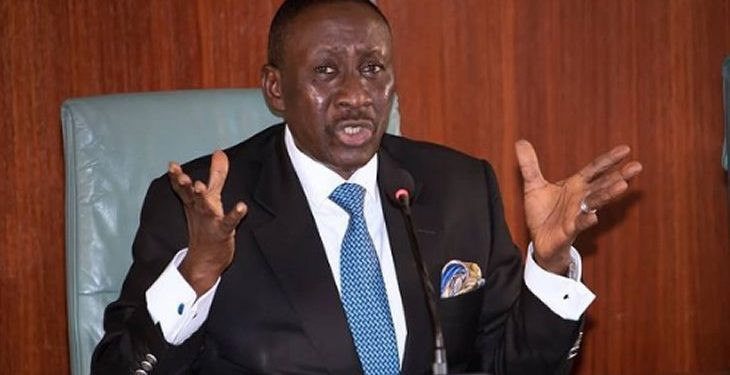 According to him, most of Nigeria’s contemporary security problems were influenced or heightened by external threat factors in the global environment and that separatists were getting popular because of the influence, support and sympathy they they get from their foreign counterparts.

Mungono, in a paper he presented on Friday, November 12,  titled “Combating persistent and emerging threats to regional peace and security In Africa: pivotal role of Nigeria”, pointed out that Africa’s porous borders aids smuggling of prohibited items and weaponry.

He revealed the federal government was considering setting up a border security force in the future to secure Nigeria’s border.

According to him, “Global trends indicate that various factors create concerns such as rapid population growth which puts tremendous pressure on states to compete for energy, water and food to support life and economic and societal development; a growing cyber awakening in which perceptions of inequality and other grievances are heightened, leading to social tension and conflicts; a continuation of ideological extremism, driven by religious or ethnic differences; and climate change that could prompt shifts in agricultural patterns and food production likely to trigger humanitarian crises, if not appropriately addressed. All these global security challenges have the potential to undermine national security and by implication national development.

“The African continent is not immune to these global security concerns. This is because most of our contemporary security problems are influenced or heightened by external threat factors in the global environment. Currently, we are faced with a series of security threats, the most serious being the transnational threat of terrorism perpetrated by the Islamic State in West Africa Province (ISWAP) and Boko Haram Terrorists (BHTs). Other major security challenges include piracy, transnational organized crimes, climate change as well as cyber threats. Undoubtedly, all these security challenges pose varying degrees of threats to the social, economic and political dynamics of not only Nigeria, but also of the African continent”.

“It should however be noted that the Nigerian government has never prevented the freedom of expression or agitation; however, the violent confrontation and engagement of security forces by these groups usually translates into fatalities and other grave consequences.

“While we continue to extend dialogue as the main medium for resolving conflicts in the country, the Nigerian government will continue to discharge its responsibility of ensuring the safety of lives and property against any criminal activity by IPOB or any separatist group”

“Africa’s porous borders remain a major source of concern as this has aided smuggling of prohibited items and irregular migration as well as other transnational organized crimes. Nigeria is bordered to the North by Niger , to the East by Chad and Cameroon, to the South by the Gulf of Guinea of the Atlantic Ocean, and to the West by Benin. However, Nigeria’s extensive land and maritime borders are incredibly porous and poorly manned. This has placed added responsibility on the border security agencies. In this regard, the Nigeria Customs Service has developed the E- Customs strategy while the Nigeria Immigrations Service has equally put in place an Integrated Border Management System (IBMS). It is necessary to observe that both strategies place premium on employing technology to complement other existing physical border security arrangements. Furthermore, as part of efforts at strengthening border security, tripartite Joint Border Patrol Teams (JBPTs) comprising Nigeria, Niger and Benin Republics were recently established to curb the increasing scale of smuggling of prohibited items as well as irregular migration across the nations’ borders. This has greatly reduced the scale of transnational organized crimes. We are also exploring the feasibility of setting up a border security force in the foreseeable future to secure Nigeria’s border areas”. He said.