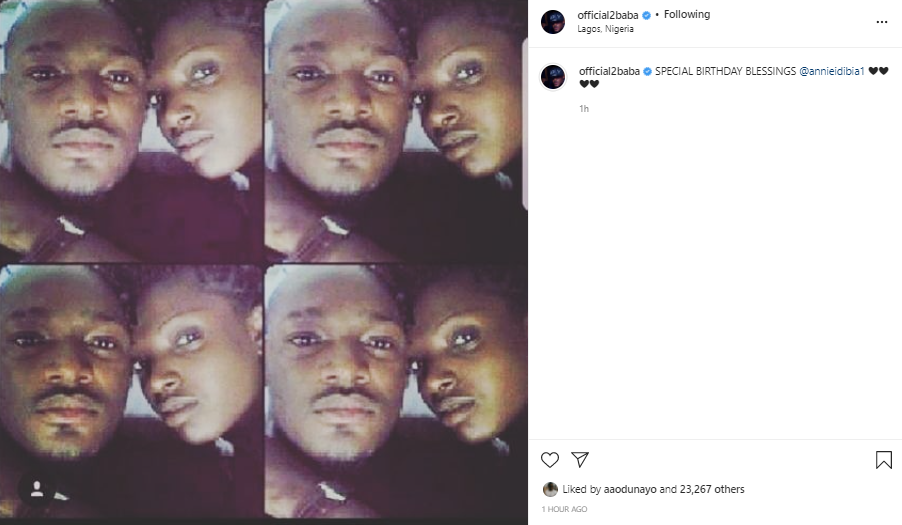 ”Together or not, it shall be well”- 2face Idibia shares cryptic post with a photo of himself and Annie hours after his babymama, Pero Adeniyi, filed N500m lawsuit against Annie

Singer, 2Face Idibia, shared a cryptic post on his IG page this afternoon hours after his babyama, Pero Adeniyi, announced a N500 million lawsuit against his wife, Annie.

The day started off with Annie who turned 37 today, apologizing to everyone she has done wrong in the last ten weeks. Recall she called 2face out on social media over claims he spent some time with Pero while he was on holiday in the US. She appealed to everyone including 2face, her mum, her mother-in-law, family members, and everyone to forgive her.  Read here.

2Face has not responded publicly to her apology but he started the day off as well by wishing her a happy birthday on his page.

Hours later, news filtered in that Pero has filed a N500 million lawsuit against Annie. In the lawsuit notice dated November 10, Pero’s lawyers referenced Annie’s Instagram outburst and the audiotape which went viral weeks ago in which she alleged that her husband, 2Face “packed his bags and came to America to see her (Pero) and his other kids”.

According to her lawyers, Annie’s allegations are “blatantly false, misrepresents facts and portrayed Pero as an individual with loose morals”. Pero is demanding for a retraction, an apology and N500m as damages. Read here.

Well, this afternoon, 2face shared a photo of himself and Annie on his page with a cryptic message. See below