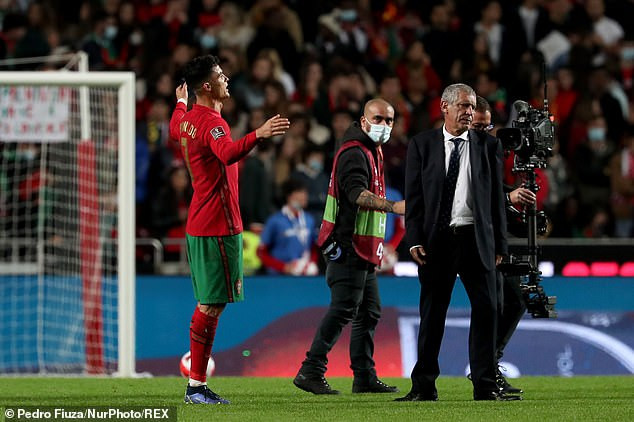 Footage has emerged  showing Cristiano Ronaldo fuming at Portugal boss, Fernando Santos after their damaging defeat by Serbia in Lisbon which puts Portugal’s qualification to the 2022 world cup in jeopardy.

Portugal will have to qualify for the next year’s World Cup in Qatar through the play-offs after a stoppage-time header from Aleksandar Mitrovic secured a dramatic 2-1 victory for the Serbians at the Estadio da Luz on Sunday night, November 14.

The result saw Serbia go top of Group A, and Ronaldo was seen breaking down in tears after the final whistle.

As players and staff from both sides shook hands following the final whistle.

Manchester United star, Ronaldo then saw Santos, 67, approaching and began shouting and gesticulating furiously with his arms towards him.

The Portugal boss quickly walked off after a brief handshake with the 36-year-old.