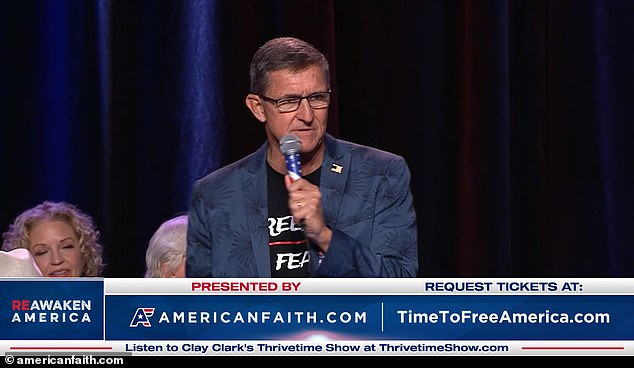 Donald Trump’s former national security advisor, Michael Flynn has stirred up outrage following his suggestion for the US to have “one religion.”

At a three-day conference in San Antonio, Texas, for the “ReAwaken America” tour, the former national security adviser and keynote speaker called for Christianity to become the singular religion of the United States.

Flynn who pleaded guilty twice to lying to the FBI, made the call at the event featuring a flurry of Trump loyalists and anti-vaxx doctors.

At the conference, Flynn also discussed former White House chief strategist Steve Bannon, who was indicted by a federal grand jury for refusing to comply with a subpoena issued by the House Select Committee investigating the January 6 Capitol riot. Flynn called the indictment an “abuse of freedom of speech.”

He also said he has taped a segment for “Tucker Carlson Tonight” on what he calls the “insurrection crucifixion,” comparing House Speaker Nancy Pelosi to Pontius Pilate, the man who ordered the crucifixion of Jesus in the Bible.

“This is the crucifixion of our First Amendment freedom to speak, freedom to peacefully assemble. It’s unbelievable.”

Mr Flynn faced an instant backlash for his comments with critics saying he “hates the constitution” and warning about history repeating itself with the Holocaust.

“Michael Flynn hates the US Constitution,” tweeted Preet Bharara, former US Attorney for the Southern District of New York.

Fred Guttenberg, gun safety activist and the father of Parkland massacre victim Jaime Guttenberg, said that Mr Flynn’s comments proved why people need to be educated about “things like race in America and the Holocaust”.

“I am assuming when Michael Flynn tells his GQP followers we need to be a nation with ‘one religion’ he probably is not thinking Judaism,” he tweeted.

Flynn, a retired Army lieutenant general who played key roles in the U.S. wars in Afghanistan and Iraq, served as director of the Defense Intelligence Agency and was briefly Trump’s national security adviser before resigning for lying to the FBI and the vice president.

He has previously spouted COVID-19 conspiracy theories, and said a Myanmar-like military coup should happen in the U.S. Despite twice pleading guilty in charges related to the Mueller investigation, Trump pardoned Flynn in November 2020 for “any and all possible offenses” related to the probe while the case was still pending.

“If you want to meet a good man, you must stop the ‘men are scum’ narrative” – Businessman, Wale Jana advises ladies

“Bitter souls are always stagnant” – Actress, Destiny Etiko hits back at people always trolling her over her exotic fleet of cars