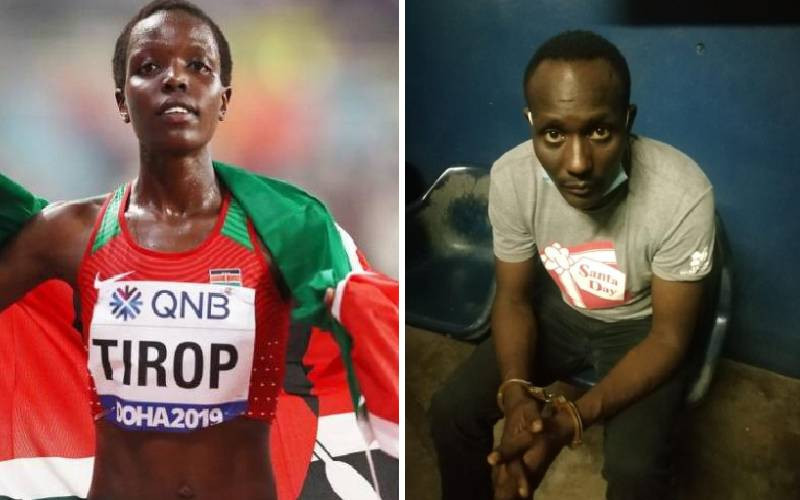 The husband of Agnes Jebet Tirop pleaded not guilty to the Olympian’s murder during a court hearing this week.

The athlete was found dead in her home last month just a week before her 26th birthday with a postmortem revealing she died from stab wounds to the neck and the impact of a blunt object to her head.

Following her death, police called for her husband Ibrahim Rotich to come forward. He was later arrested as he tried to leave the country.

He has since appeared in a Kenyan court, and the 41-year-old had been instructed last week to undergo a mental health test before entering his plea.

Rotich was pictured arriving in court on Tuesday in handcuffs and looked down at the floor for the majority of the proceedings.

His lawyer, Joseline Mitei, declined to discuss the details or results of his mental health evaluation and insisted she is will apply for her client to be released on bail, with the hearing set for December 1.

“I intend to put formal application in court for my client to be released on bail,” Mitei said.

When he was arrested by Kenyan police, it was reported he had been trying to leave the country and rammed his car into a lorry in the process.

Crime scene investigators were at Tirop’s home after her body was discovered – after her father reported her missing the night before, according to local police.

“When [police] got in the house, they found Tirop on the bed and there was a pool of blood on the floor,” Tom Makori, head of police for the area, said.

“They saw she had been stabbed in the neck, which led us to believe it was a knife wound, and we believe that is what caused her death.