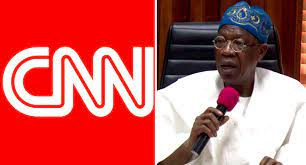 Lekki shooting: Lai Mohammed should apologize to us

A Lawyer to the Cable News Network (CNN) has said the honorable thing for the Minister of Information and Culture, Lai Mohammed, to do is apologize to the news platform after discrediting its investigative report on the October 20, 2020 Lekki tollgate shooting.

CNN in a report released said that the military did attack the unarmed protesters and fired live ammunition of them. Lai Mohammed held several press conferences where he condemned the report and tagged it fake news while insisting no one died in the incident.

Recall that on Monday, November 15, the Lagos state Panel of Inquiry, released its report to the state government in which it indicted the Nigerian Army and Police of killing and injuring the unarmed protesters during the protest.

In a statement released, CNN’s Nigerian counsel, Olumide Babalola, asked Lai Mohammed to publicly apologize for misleading Nigerians on the Lekki shooting. Babalola argued that the Lagos #EndSARS panel’s report had vindicated CNN’s investigative report on the night of October 20, 2020.

“Alhaji Mohammed had consistently claimed that the CNN’s report of massacre was false, but the panel has vindicated the CNN’s position on the gruesome and wanton killings at the Lekki tollgate.

Without necessarily saying more on this, since the same minister had earlier called on the CNN to apologize for fake news, which has now been quasi-judicially proved to be true, one would think the honourable thing for Alhaji Mohammed to do, as an elder statesman and learned gentleman, is to apologize to the CNN especially.

However, as we continue to wait on the minister and the Federal Government’s next move, I sympathise with families of all the victims of Lekki massacre, while we pray for the souls of the departed and hope the government implements the report in full.”Babalola said