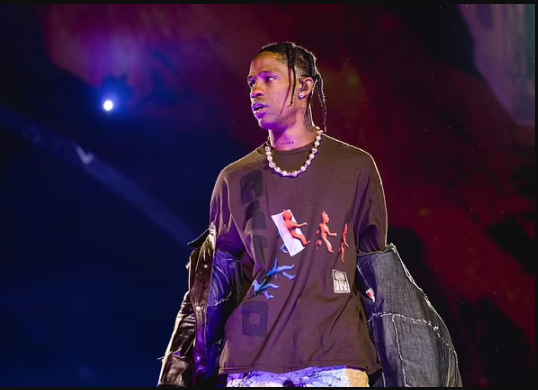 More than 125 fans have sued rapper Travis Scott for $750 million over the deadly Astroworld Festival incident that left 10 dead and hundreds injured earlier this month.

The lawsuit, filed by Houston Attorney Tony Buzbee,  who had previously been representing at least 35 victims from the concert – accuses Scott and festival organizers of ‘gross negligence’ for the chaos at Astroworld on November 5.

The suit also names Live Nation, Epic Records Drake, and Apple as defendants for their involvement in organizing the festival, and Buzbee plans to file another lawsuit with 100 more plaintiffs in the coming days.

‘But, the damages sought in this case attempts to fix, help, or make up for the harms and losses suffered by these Plaintiffs — nothing more and nothing less.’

The lawsuit comes as W Magazine is reportedly scrambling to pull their next issue featuring Kylie Jenner and Scott on the cover after the Astroworld Festival tragedy.

Buzbee alleges that Scott incited the crowd frenzy as he has often praised violence in mosh pits and yelled at attendees to attack one another.

Buzbee claims Scott and the concert promoters and organizers failed to have protective measures in place to protect the concert goers.

Among those Buzbee is representing is the family of Axel Acosta, 21, of Washington, one of the ten who died at the concert.

‘When Axel collapsed, he was trampled by those fighting to prevent themselves from being crushed. As he lay there under a mass of humanity, dying, the music played and streamed on—for almost forty minutes.’

In a statement, Live Nation said ‘We continue to support and assist local authorities in their ongoing investigation so that both the fans who attended and their families can get the answers they want and deserve, and we will address all legal matters at the appropriate time.’

Editors at W Magazine are said to be desperately attempting to recall the magazine ‘before it hits store shelves,’ a source told Page Six this week.

‘W editors have cleared any planned coverage of Travis and Kylie from their website, but the magazine was already printed, and now they are trying to stop the delivery trucks,’ an insider told the outlet.

Additionally, they explained: ‘In the light of what happened at Astroworld, the interview and cover lines seem inappropriate, to say the least.’

On Monday, Nike announced they would postpone their sneaker release with Scott after a nine-year-old boy became the latest fatality in a deadly crowd surge during his performance in Houston.

Tekno writes on how to ‘fix’ Nigeria