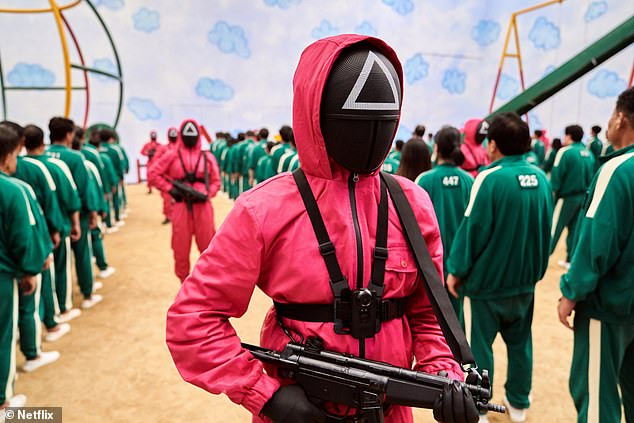 Squid Game is most watched show with 1.6billion hours viewed in the first 28 days

Streaming giant, Netflix has revealed its most watched shows, ending 14 years of hiding its viewing figures.

The company has launched a metrics website called ‘Netflix Top 10’, which shows Netflix’s most popular TV shows and films both globally and in more than 90 individual countries.

From the figures, sitting at the top of the company’s most viewed list is the Korean series ‘Squid Game’ which has had 1.6 billion hours viewed within the first 28 days of having been released – and has so far spent nine weeks in the top 10 shows on Netflix.

In the last week alone it racked up 42.7m hours viewed globally.

Elsewhere, according to the streaming service’s new metric, ‘Red Notice,’ starring Dwayne Johnson, Gal Gadot and Ryan Reynolds, has been watched for 148.7 million hours globally since it debuted on November 12 on Netflix.

In the past week, the most popular series was season three of ‘Narcos: Mexico,’ with 50.3 million hours viewed.

Since Netflix began streaming in 2007, the company has been reluctant to release its viewing figures

Speaking in 2019, Scott Stuber, Netflix’s head of original films, told the Hollywood Reporter that secrecy of its viewing figures is ingrained in the company’s DNA saying filmmakers no longer have to care about ratings .

He explained: ‘It was for television creators to get out of ratings and Standards and Practices and actually free up their narrative form so that they could tell stories that weren’t [influenced] night after night by those numbers. So the methodology was right. And now, as we have grown … we are used to it.’

Every Tuesday, Netflix will update the site with the top 10 series and films on the streaming service.

‘This is an important step forward for Netflix, the creators we work with and our members,’ Pablo Perez De Rosso, a vice president for content strategy at Netflix, wrote in a blog post Tuesday, November 16.

‘People want to understand what success means in a streaming world, and these lists offer the clearest answer to that question in our industry.’

Popular Night Club Owner, Ogede ”Ijele of Lagos” Set To Walk Down The Aisle With His Sweetheart, Faith Ejehirele (photos)