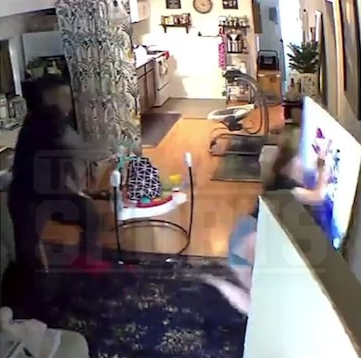 The TV then falls on top of the woman as she tries to calm Stacy down but he throws an object at her and storms out before returning to continue.

Throughout the video, you can hear the woman begging Stacy to stop.

In those documents, Stacy’s ex claims the football player came over to her house around 2 PM on Saturday to see his son.

While there, she claims he flew into a jealous, violent rage.

“He punched me several times in the head! I begged him to stop because the baby was on the couch just a few feet from where he punched me,” the woman wrote in the restraining order application.

That’s when she says Stacy said “I love you” to their baby boy, and escaped from the house.

In the restraining order documents, the woman adds, “I fear for my life and my children’s lives.”

She says she went to the hospital, where she was treated for a possible head wound, as well as bumps and bruises.

Watch the video of the assault below.