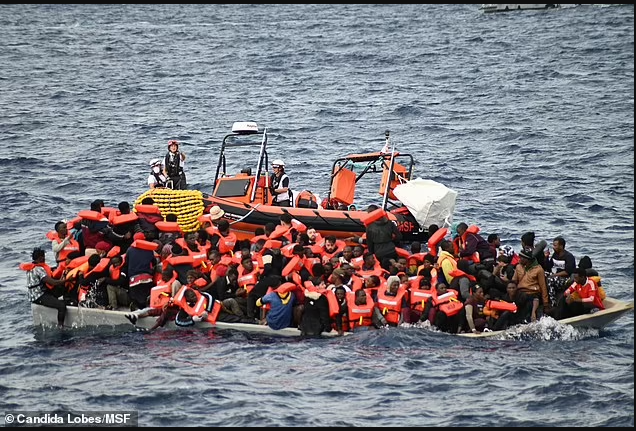 Ten migrants have been found dead in a packed wooden boat trying to cross the Mediterranean.

The ramshackle boat, which was packed with around 100 refugees, was found by the Doctors Without Borders (MSF) team, drifting 30 nautical miles away from the coast of Libya, where it departed from, Mail Online reports.

Dozens of survivors were rescued by the MSF team, and are now on the Geo Barents rescue vessel.

Those on board revealed there was a powerful smell of fuel in the boat and victims had spent more than 13 hours in the lower deck.

Caroline Willemen, project coordinator on the Geo Barents, described the Mediterranean as the ‘deadliest migration route’.

‘We are once more witnessing Europe’s unwillingness to provide the much-needed dedicated and proactive search and rescue capacity in the Central Mediterranean’ she added.

According to MSF, Geo Barents was alerted of a boat in distress that was taking on water, but couldn’t arrive on time to avoid the tragedy.

Referring to the victims Fulvia Conte, MSF deputy said: ‘It took us almost two hours to retrieve them and to bring them on board, so they can have a dignified burial once arrived onshore.’

Abdoulaye, who was one of the last survivors to leave the boat told the rescuers he barely had time to understand what had just happened.

‘Let me see their bodies. These are my brothers, we come from the same place, we went through Libya together,’ Abdoulaye asked the volunteers, ‘I need to tell their families they are dead. Please let me see them.’

In less than 24 hours, the MSF team rescued three different boats in international water near Malta and Libya, bringing a total of 186 people safely on board of the Geo Barents.

Willemen has warned: ‘With 186 survivors on board, including relatives of some of the deceased people, and people who travelled for hours on the lower deck of the boat amongst dead bodies, the Geo Barents will urgently be looking for a Place of Safety to disembark this group of extremely stressed and likely traumatised people.’

According to the Guardian, the rescue hotline Alarm Phone accused European authorities of ignoring the distress call: ‘We had raised the alarm, several hours before, but no one answered. We are fed up with the announcements of these deaths that could be avoided’

Among the survivors there are 152 men, 34 women and 61 minors, including a 10-month-old child, coming from a range of countries including Guinea, Nigeria, Ivory Coast, Somalia and Syria.

So far this year, around 1,225 migrants have died or gone missing while trying to make the perilous crossing to Europe via the Mediterranean.

“I am so happy that you have finally put your differences aside and allowed love guide you” – Lola Omotayo celebrates her husband, Peter and his twin brother Paul