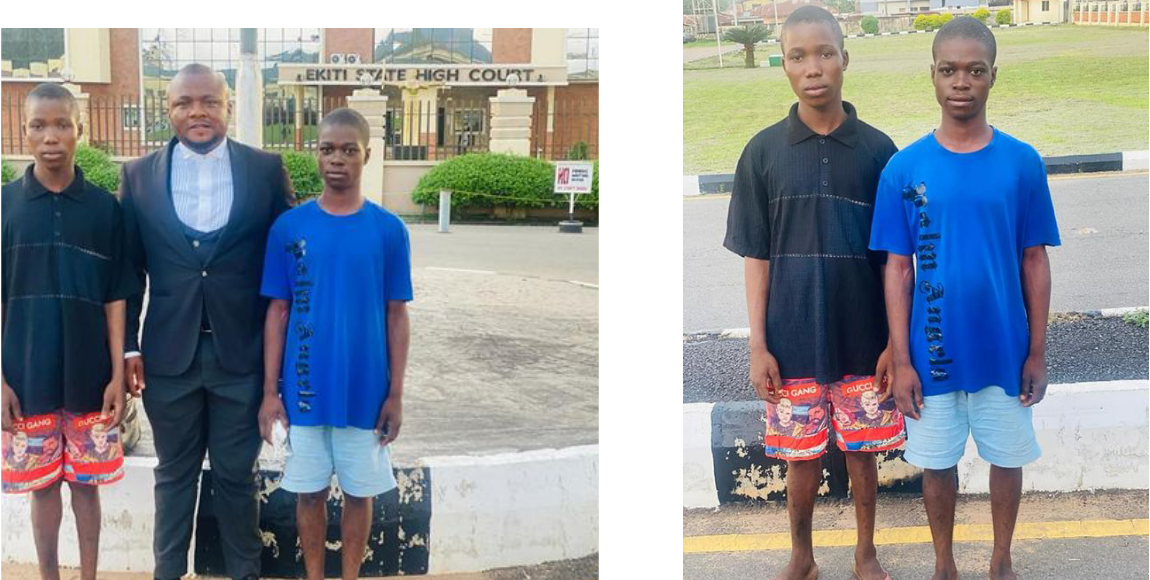 The boys, Monday Oni, 17, and Femi Ayomide, 15, were detained since February 2021, for allegedly stealing eye drops meant for their father, who is said to be suffering from eye problems.

Their lawyer, Tope Temokun, said the boys were ordered to be released by a magistrate’s court in Ado-Ekiti on Tuesday, November 16.

“The police arrested, charged them and got them remanded in prison, but stopped coming to court due to lack of evidence. So the magistrate had to strike out the case,” said Barr. Temokun

Taking to Facebook on Wednesday, Temokun narrated how the boys were arrested in Ikole Ekiti over allegations of stealing eye drops.

Temokun said a neighbour, who accused them of bringing things home without any source of income, instigated the police against the boys. Read below:

Two brother-teenagers, Monday (15years old) and Ayomide (16 years old), with a blind father, accused of stealing eye-drops for their father’s use, regained their freedom today after spending 10 months in prison

A neighbour tipped the police off that they brought things home without any source of income and after the police visited and searched their house, eye drops were found and typical of Nigerian police of “wey the receipt” form of arrest, the teenagers were promptly arrested

They were charged before a magistrate court who ordered their remanded them in Ado Ekiti prison, far away from Ikole Ekiti, their town, since February 2021 till their release today after some efforts from our chambers represented by Benjamin Obilor Esq. and a conscientious youth activist in Ekiti, Comrade Moyinoluwa Victor Emmanuel , who is also a victim of persecution by Ekiti State government, for participating in the October 2020 #EndSARS protest and who encountered these teenagers in prison and reported the case to our chambers.

I was moved by Moyinoluwa’s passion for justice. On the day he spoke with me for the first time, he said since he left prison, his conscience had not let him rest anytime he remembered those two teenagers in prison.

They are out today. Nothing shall discourage us!