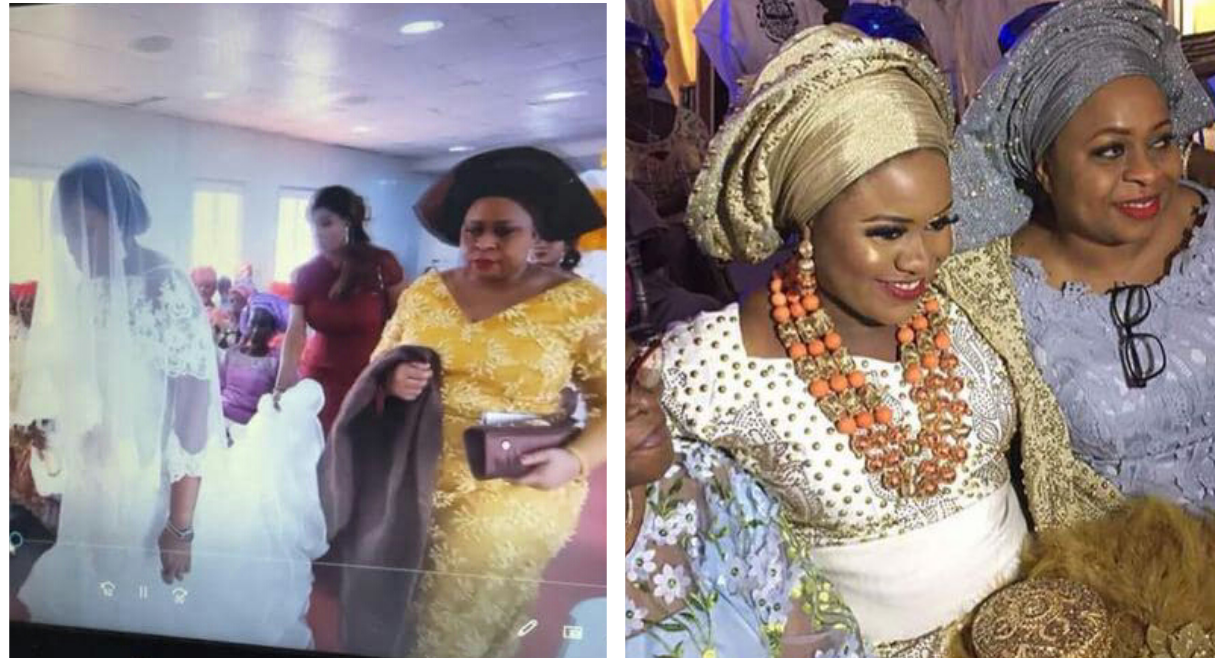 A UK-based Nigerian woman, Olabisi Ekwueme Ajai, has narrated how she defied patriarchy and challenged the norm by walking her sister Dupe, down the aisle on her wedding day.

According to Ms Ajai, during pre-marriage counselling, Dupeola informed the Methodist Church minister that her sister would be giving her away at the wedding because she took over the role of a mother after the death of their parents.

However, the Reverend vehemently refused and insisted that it must be a man as it’s not part of ‘tradition’ for a woman to give away the bride. Read her below:

Ms Ajai who still went ahead to walk her sister down the aisle,  posted pictures of the ceremony on Facebook with an interesting caption. Read her post below

Our mother died when Dupeola was maybe around age 6 and I, around age 22. Our mother, D, was an only child so, Maami, our maternal grandmother and I took over the role of mother.

Our dad, JOPA died when Dupe was in her early 20s or so. JOPA had done all the work of being a father (and mother too). When Dupe was getting married and went for pre-marriage counselling, the Revd asked who would be giving her away. She told the revd that it would be me. That was when wahala started.

This revd who knew our family very well, said that it had to be a man. My sister said no man deserved that honour apart from JOPA. She wanted me who has stood in as her mother and taken care of her to give her away. Revd said no. It had to be a man. He suggested our half brother, Ope, who was maybe 19 years old then, to have that honour

Right. So, a 19 year old can give away a bride but a 40 something year old can’t? Because

Fast forward to the wedding day. My sister had not arrived but I was there in the church. The revd came to me and asked if we had decided on who would give her away. I said yes. Dupe wants me to do it. The revd said but he told Dupe it has to be a man. It can NOT be a woman. He would NOT allow a woman give her away

Hmmm… that was how argument started. Why can’t our half brother do the honour? He demanded. Why am I insisting on doing it

No. I am not insisting on doing it. Dupe, the bride wants me to have the honour as I have been taking care of her since she was 6

Please explain to me why a woman can’t give away the bride, sir?

It is not our culture.

Is Christianity an African culture sir?

Is Christianity an African culture sir?

Ok. Please show me where in the Bible or Methodist Church constitution it says that a man has to give away the bride. If you can show me your authority, I will step aside

I will not allow it! It has to be a man and that is final! You are just bent on ruining your sister’s wedding day

Nope. My sister is actually the one who told me she wanted me to have the honour

All this time, I kept my cool. I did not shout. But the more this revd (foolishly and wickedly) insisted, the more emotional I got at the injustice

Sir, why don’t you admit that it your own bias that is at play here? That you personally do not want a woman to give away a bride?

My aunt, Mrs Olabomi Cole of blessed memory, who was also a deaconess in the Methodist Church explained to him why it was imperative that I gave the bride away. The revd still insisted on his way

The Archbishop arrived. So, I approached the Archbishop. My aunt stood by me. I explained to the archbishop that my sister wanted me to have the honour of giving her away as I had been her mother figure since she was around age 6.

Thank you sir. May I suggest that you use your office to let it be known that there is no reason why a woman cannot give away the bride in marriage sir?

I will look into that, Mrs Layode My Ajai family is quite a forward thinking family so, for the traditional marriage, the family did not impose. I and the olori ebi, Mrs Yewande Bada sat as the parents. Once again, no man

So, now, I am telling you, yes YOU, that you can stick a middle finger up at patriarchy. YOU can decide that you refuse to be treated as less of a human being simply because you have the ability to bleed every month and not die