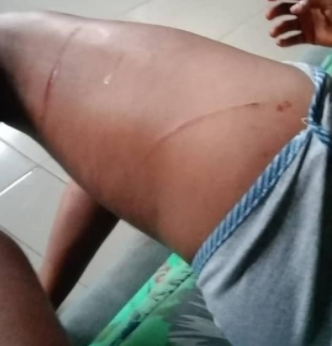 EndSARS lawyer, Adesina Ogunlana, raises alarm after one of his witnesses was macheted by suspected hoodlums in Lagos

Counsel to EndSARS protesters at the Lagos state Panel of Inquiry, Adesina Ogunlana, says a prominent protester and one of his witnesses at the panel, Kamsi, has been attacked by suspected hoodlums who used a machete on her.

Adesina who shared graphic photos of Kamsi with a deep cut on her hand wrote;

”LESS THAN 24 HOURS TO WORLD PRESS CONFERENCE ON THE CONFIRMED LEKKI TOLL GATE MASSACRE , KAMSI, A LEADING ENDSARS PROTESTER/ PETITIONER/ WITNESS/CAMPAIGNER MATCHETED VICIOUSLY IN LAGOS . HER ATTACKERS SHONE A TORCH LIGHT ON HER FACE BEFORE ATTEMPTED MURDER , SAYING IN YORUBA AND PIDGIN ENGLISH ” OH WE KNOW YOU , SHEBI THEY HAVE WARNED YOU PEOPLE TO STOP, BUT YOU WILL NOT STOP .WHEN YOU DIE NOW, CONTINUE , ‘