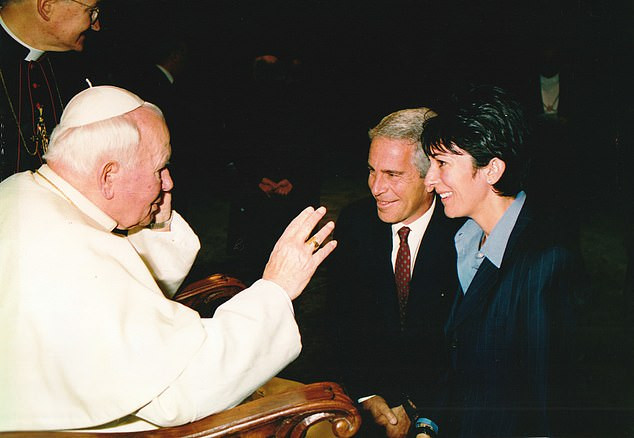 A picture showing billionaire paedophile Jeffrey Epstein and his alleged ‘madam’ Ghislaine Maxwell being blessed by the Pope has emerged.

In the photo the pair clench their hands together and sport beaming smiles as the Roman Catholic church leader at the time prays for them.

It is believed the photo was taken after the pair flew from Madrid to Rome in May 2003 for the meeting.

The image shows the late pedophile and his ex-partner holding a private audience with John Paul II at the Vatican almost 20 years ago.

According to the Sun, which released the photo, the pair are believed to have flown to Rome on Epstein’s ‘Lolita Express’ jet for the meeting, said to have taken place in 2003.

It is the same aircraft federal prosecutors in the US believe was used by Epstein to shuttle young sex trafficking victims between his sprawling homes in New York, New Mexico, Paris, the US Virgin Islands and Palm Beach, where the pedophile owned a waterfront mansion.

A source told the paper: ‘Pictures like this show just how powerful Epstein’s connections were and his ability to open almost any door.

‘He managed to manipulate his way into royal palaces, the White House and the Vatican, all with Maxwell by his side.’

Epstein killed himself in his jail cell while awaiting trial for a string of sex trafficking offences in 2019, while Maxwell, 58, will stand trial later this month in New York, accused of procuring young girls for Epstein – as well as taking part in abuse herself.