“Blue passport na your mate?” Pere, Boma and Michael show off their American passports as they jet off to Dubai

Big Brother Naija stars, Pere, Boma and Michael, have taken to social media to show off their American passports as they prepared to board their flights to Dubai.

In a video Pere shared on his Instastory, the trio put their blue passports on display and described themselves as ‘blue passport boys’.

They are said to be on their way to Dubai for the One Africa Music fest slated for Friday, November 26. 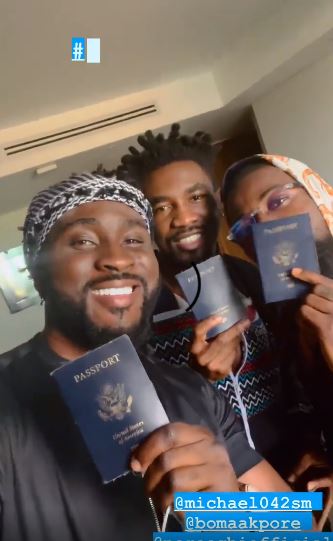 The reality show stars have all spent lengthy periods of time in the United States hence the reason for owning American passports.

Pere served in the United States military for six years before coming back to Nigeria to pursue acting and other careers.

Boma, a professional model and one-time footballer, lived in Brooklyn, New York city, before his appearance on the BBNaija show.

Michael, on his part, moved to the United States of America when he was a teenager. It was gathered that he had his high school and university education in America.

Watch the video of them showing off their passports below,