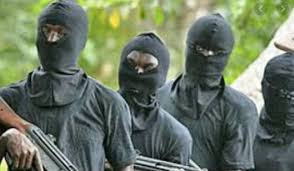 Mary was said to have been abducted by masked men when she and another member of the family were about to open the gate of the house for their mother who was coming back from an outing.

“ As I was getting home from church, my children went to open the gate for me. When we got there, we did not see anybody until we entered the compound. I even thought they were the vigilantes.

l gave them the car key. They asked for my money, they picked the bag themselves and took all the money.

They asked me to lie on the ground so I could not look up, but faintly I saw one of them carrying something, but I just thought they were carrying a bag and I didn’t know whether it was my baby girl they carried.

They used masks to cover their noses and mouths and asked me not to shout. They didn’t go in the car, they only went with the car key.

l was calling Mary, where are you? I then noticed that I didn’t see the girl, that was when I started shouting and people came around.

A neighbour coming with an okada ride,  followed them and was shouting ‘thief thief’ but they had gone far.

They came with a Mercedes Benz car without a number plate.”

Meanwhile, a family source says the abductors have reached out to the victim’s parents, demanding an N20 million ransom.

”The kidnappers have contacted the family and they have requested for N20m ransom before the girl would be released by them. The parents of the baby have pleaded with them to reduce the ransom but they remained adamant.

They have not called again after the initial communication with the victim’s parents. They warned the parents not to involve the security operatives especially the Amotekun if they still want to see their child alive.”the family source said