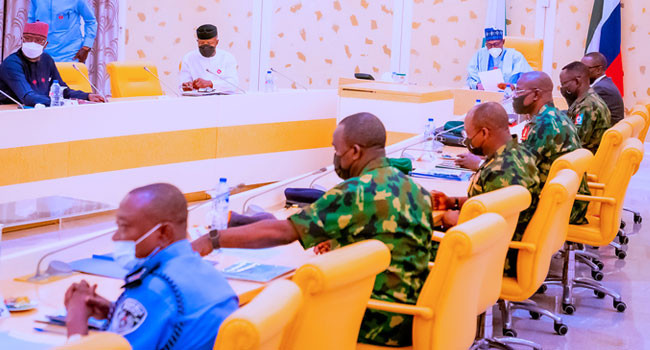 President Buhari has renewed his calls for all security agencies to double their efforts in tackling all those challenging Nigeria’s sovereignty and creating insecurity through criminality in whatever way.

The Minister of Interior, Rauf Aregbesola, disclosed this after a Security Council meeting presided by President Buhari on Thursday at the Aso Villa in Abuja. He told State House correspondents that the meeting which lasted more than four hours also discussed the resurgence of criminal activities along the Abuja-Kaduna Highway.

“The President said that we are not yet where we should be; that Nigerians deserve to live in peace. We appreciate the fact that we are in the season of festivity.

So, all agencies – committed to providing security for Nigerians and the maintenance of law and order – have been ordered to improve on their activities, intensify surveillance, and minimise if not eliminate totally any threat, and you will see an improved response to all those challenging the sovereignty of Nigeria in whatever form and creating insecurity in whatever form anywhere.”he said

Aregbesola said President Buhari tasked the security agencies to intensify surveillance, patrol, and pursuit of criminals and eliminate any threat to law and order in the country.

“The Council today (Thursday) took a firm decision on what is to be done and I can assure Nigerians that with the charge from the President and the Commander-in-Chief of the Armed Forces, there will be an improved response to all forms of criminality in any part of Nigeria,” the minister said