Lady goes wild with excitement, yanks wig off as her boyfriend proposed to her (video)

A video serving rounds online captures the moment a Nigerian lady went wild with excitement after her boyfriend proposed to her. 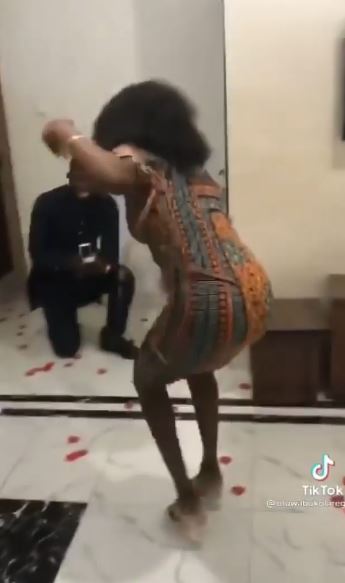 In the surprise proposal video, the room was set up with petals and balloons while the young man knelt down on one knee to ask for her hand in marriage.

When the lights came on, the lady couldn’t believe her eyes and started jumping up and down with excitement so much that her wig flew off her head.

Some friends of the couple who were also present, filmed the video which has now gone viral on social media.

The video has generated hilarious reactions on social media. See some below,

@boatnaija wrote, “Dear future wife, if you no scream like this, I won’t propose 🤣🤣”

@king_adehun wrote, “But what will she now do on wedding day gan gan😂😂.”

diyas_makeover wrote, “I thought marriage proposals are suppose to be so romantic? Why is she acting as if as if a pastor is casting demons on her?”

I never said donate money to me, I said ‘if you’re my friend give me money’