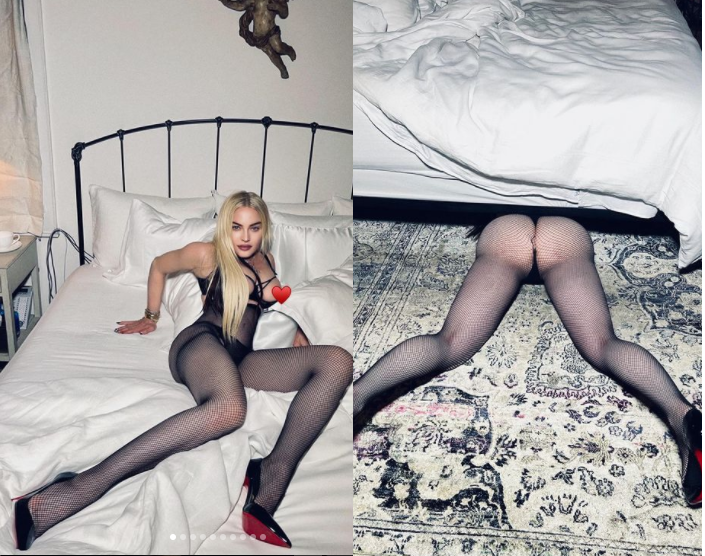 Madonna, 63, slams Instagram for taking down post of her exposed nipple, reposts edited versions of the explicit photos

Madonna has reposted edited versions of the explicit photos she shared to her Instagram account after they were taken down for violating community guidelines.

In a lengthy caption, the hitmaker, 63, branded the social media platform’s strict nudity policies as ‘sexist’ and compared the unwavering social stigma around the female nipple to that of the ‘lies’ told about the Pilgrims’ ‘peaceful’ treatment of Native Americans at Thanksgiving.

‘I’m reposting photographs Instagram took down without warning or notification….. The reason they gave my management that does not handle my account was that a small portion of my nipple was exposed,’ she began.

‘It is still astounding to me that we live in a culture that allows every inch of a woman’s body to be shown except a nipple. As if that is the only part of a woman’s anatomy that could be sexualized. The nipple that nourishes the baby!

‘Giving thanks that I have managed to maintain my sanity through four decades of censorship…… sexism……ageism and misogyny.

‘Perfectly timed with the lies we have been raised to believe about the pilgrims peacefully breaking bread with the Native American Indians when they landed on Plymouth Rock! God bless America,’ concluded the songwriter before adding the hashtag ‘#artistsareheretodisturbthepeace’

Instagram’s official Community Guidelines explicitly state that nudity is not allowed on the platform and that the female nipple is included under that umbrella.

In the unedited images, the singer was pictured in bed wearing fishnet stockings, thong underwear, and a very racy black bra that showcased her nipple and butt.

Glo has made our Christmas

LIB is 15 today! Check out the very first post on the blog on this day 15 years ago