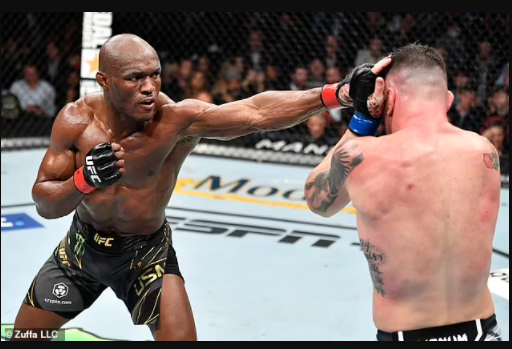 UFC welterweight champion  Kamaru Usman has revealed he defeated Colby Covington with a broken hand after suffering the injury three weeks out from fight night while sparring Justin Gaethje.

The Nigerian Nightmare, 34, earned a unanimous decision victory over arch-rival Covington at UFC 268 in New York City, in which he floored the challenger in the second round but was unable to get the finish.

Usman has now come out to disclose that he sustained a broken hand three weeks before the fight at Madison Square Garden.

‘I broke it before the fight,’ Usman told Full Send Podcast. ‘Most people didn’t know that. I broke it three weeks before and I didn’t throw it a day until the fight itself.

The welterweight king lifted the lid on the cause of the injury, revealing that he broke his hand during a sparring session with lightweight contender Gaethje.

‘I broke it on someone’s head,’ he added. ‘Justin Gaethje’s head. We spar together. Same coach, main training partners-slash-big brother, little brother-slash-two assassins in the same place. He gets the better of me sometimes. Justin Gaethje’s a savage.’

On failing to defeat Covington inside five rounds, Usman said he was ‘disappointed’, but he also notes that his rival’s powers of recovery, added to his injured hand, meant it would be difficult to secure a knockout.

‘So I get in the fight and I’m going, “Damn, I just can’t find him with that right hand.” But that’s because my timing wasn’t there, but the left hand I was finding him.