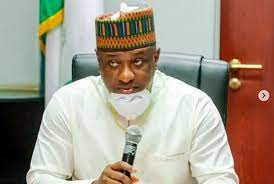 The Minister of State for Labour and Employment, and a Senior Advocate of Nigeria, Festus Keyamo, has faulted the judicial panel of inquiry set up to investigate cases of police brutality and SARS-related abuses across the country, saying it is illegal.

While responding to a question about the position of the government specifically regarding a leaked report by the Lagos judicial panel, the human rights lawyer in an interview with Channels TV, said the state government can’t investigate the conduct of policemen and military.

All lawyers who are listening to me should go back and the Tribunal Act of Lagos state. It says that the governor would have power to inquire into the conduct of any person, chieftaincy matters and so on that would promote the good of the public.

However, any person there was defined in section 21 to mean public officers of the state. This means somebody within the public service of Lagos state. or of the local government as the case may be. The phrase was used at the end of section one which says ”any matter”, that is they can inquire into any matter.

The police men, armed forces and military are not under the control, they are not officers of Lagos state. They are officers of the Federal government. By virtue of the constitution, it is only the Federal government that can control the conduct of the policemen and the military. Lagos state is not and cannot be in control. You cannot legislate too regarding police and military matters.

You cannot say you now hide under that phrase of any matter to defeat the original purpose of the law that says do not go beyond the persons over whom you have control.

So when you now say any matter and in the course of delving into any matter you now call people and begin to inquire into the conduct of people not under your control. It is illegal. Completely illegal. And no paper or recommendation can come out of an illegal panel. Nothing1 ”he said

On November 15, the panel of inquiry into the October 20, 2020 shooting at the Lekki tollgate submitted its findings to the Lagos state governor, Babajide Sanwo-Olu. The panel in its report accused the Nigerian Army and Police of carrying out a massacre on the protesters at the Lekki tollgate.

“Grace did that, Wizkid did that for me” – Buju gracefully writes after performing at the O2 in London.