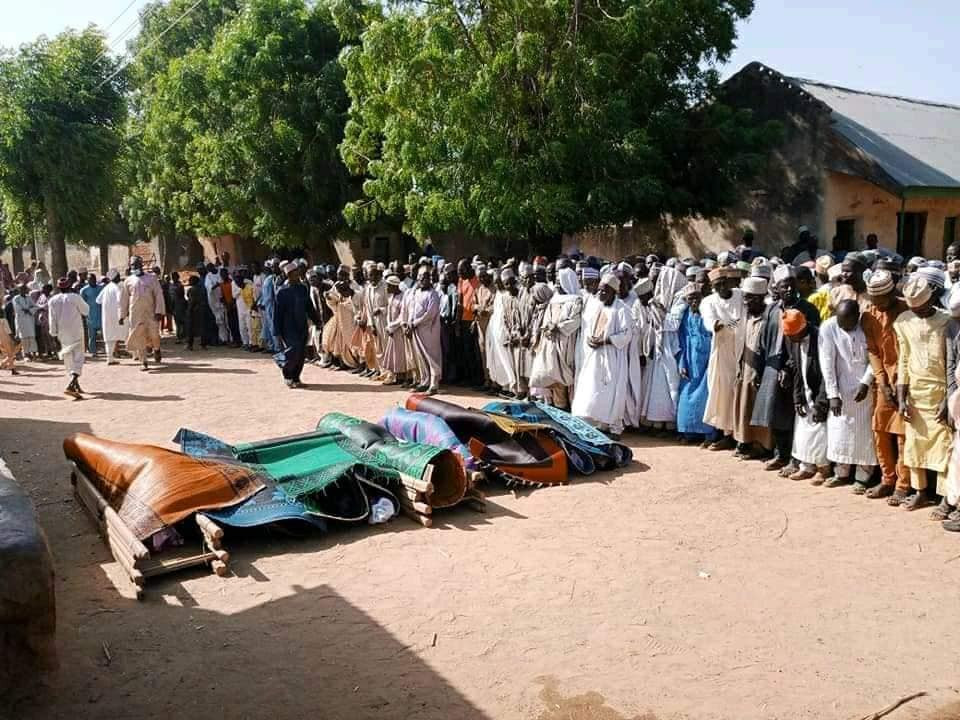 Photo from the funeral in Badau village

The boat was conveying Islamiyah school children and other passengers from Badau village to Bagwai town, the council headquarters for an annual Maulud celebration.

The State Commissioner for Information, Malam Muhammad Garba, who confirmed the development, said 29 bodies have been recovered while seven others are in hospital and 14 persons are presently still missing.

He said this after an executive emergency meeting held on Wednesday in Kano where it was resolved that the state government should brief the press over the unfortunate incident of the Bagwai boat mishap.

“The incident has so far resulted in the death of 29 people. Among them are men and children. As of today, seven victims are responding to treatment at Bichi General Hospital. Search for 14 persons is still ongoing because the total number was about 49 people,” he said.

“After extensive deliberation on the ill-fated incident, the council resolved to take following immediate measures: one, provision of relief materials to the bereaved families with 120 bags of rice, maize, millet, corn respectively, 50 bags of sugar, 50 bags of table salt, and cash support of N100,000 per head which amounts N6 million.

“The council also approved the immediate formation of an investigation committee to unravel the circumstances leading to the sad incident, as well as forestall further occurrence.”

The council also directed the state transport service to provide two buses to be conveying people from Bagwai and Badau, while the state government procured three boats for shuttling for a period of one year.

Also confirming the casualty figure, spokesperson of the state police command, Abdullahi Kiyawa, said that 36 passengers had been accounted for from the incident.

He said 29 of them were confirmed dead by medical doctors while seven others were rescued, and were recieving treatment at Bagwai hospital.

Kiyawa said among the 29 corpses recovered, 21 were females while eight were males. The victims rescued alive include four females and three males, the police said.

Kiyawa added that a rescue mission was ongoing involving local fishermen, fire service officials and the police as of Wednesday evening.

Governor Abdullah Ganduje, in a statement through his media aide, Abba Anwar, condoled with the families of the deceased, describing the incident as a state tragedy.

“While we pray to Allah to forgive and bless the souls of those who died and pray for a quick recovery of those who are in the hospital receiving medical attention, I urge boats operators to always take the issue of overload very seriously,” the statement said.

Ganduje appealed to boat operators to avoid overloading, and “they (boat operators) should know that they can still get profit without overloading their boats,” he urged.

The governor said the same axis was where a serious mishap was recorded some years back, warning that, people should know that the lives of all fellow human beings are too important to be risked deliberately.

“We salute the courage and patriot posture of the rescue teams,” the governor added.

Discourse on Nigeria’s unity driven by ignorance and emotion