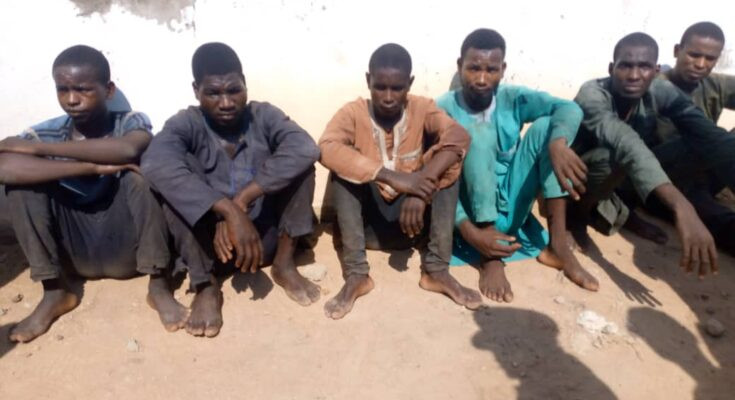 The Kogi State Command of the Nigerian Security and Civil Defence Corps, (NSCDC), in collaboration with the Hunters Group of Nigeria, have arrested six suspected kidnappers.

Parading the suspects on Tuesday, November 30, the Kogi State Commandant of NSCDC Suleiman Mafara said the arrested suspects have been terrorising inhabitants of Oshokoshoko, Obajana and Akpata Communities along Kabba road.

Mafara said the kidnappers who are between the ages of 15 and 20 years were believed to be Fulanis from Katsina and Niger States.

He explained on receipt of complaints from families of victims on activities of the criminals, including kidnapping for ransom and the rape of women, security operatives swung into action and arrested them from their operational base in the forest.

The Commandant said one Mrs Rebecca Simon was abducted on the 20th February 2021 and a ransom of N200,000 was paid by the husband before she regained her freedom.

He added that another victim, James Peter was set free after parting with N230,000 to the kidnappers.

Items recovered from the suspected kidnappers include a locally made pistol, four single bullets proof, two materials believed to be charms, rings, hoods bangles, half bag of sesame and four litres of petroleum product.

On interrogation, the suspects confessed to the crime.

The State Commandant who said all the suspects would be charged to the Court after investigations are concluded called on the people of Kogi State to always avail security personnel credible and timely information about the activities of criminal elements in the state.