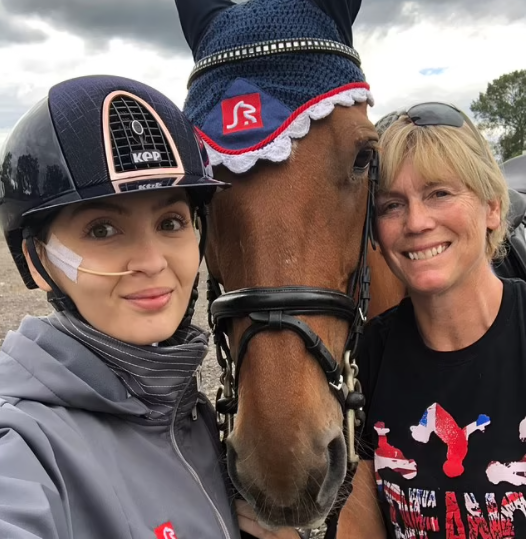 A showjumping star who sued her mother’s doctor for allowing her to be born has won the right to millions in damages in a landmark High Court ruling today, Dec. 1.

Evie Toombes, 20, was born with spina bifida and sometimes spends 24 hours-a-day connected up to tubes. Despite that, she has forged a career in showjumping, competing against both disabled and able-bodied riders.

She has also gone on to meet with Prince Harry and Meghan Markle.

Last month, in a “wrongful conception” damages claim, Evie, from Skegness, Lincolnshire, sued Dr Philip Mitchell over his failure to advise her mother Caroline Toombes, 50, to take vital supplements before getting pregnant.

She claimed that if the doctor had told her mother that she needed to take folic acid supplements to minimise the risk of spina bifida affecting her baby, she would have put off getting pregnant until she had done so, and as a result Evie would never have been born at all.

In a landmark ruling in London today, Dec. 1, Judge Rosalind Coe QC backed Evie’s case and awarded her the right to a huge compensation payout.

Her lawyers earlier said the amount Evie is claiming has not yet been calculated, but confirmed that it would be “big” since it would cover the cost of her extensive care needs for life, Dailymail reports.

The judge ruled that had Evie’s mother had been “provided with the correct recommended advice, she would have delayed attempts to conceive.”

She added: “In the circumstances, there would have been a later conception, which would have resulted in a normal healthy child.”

The ground-breaking ruling means that a healthcare professional can now be found liable for negligent pre-conception advice which results in the birth of a child with a serious health condition.

“I’ll never regret the love I gave, even if it wasn’t reciprocated” – Tonto Dikeh