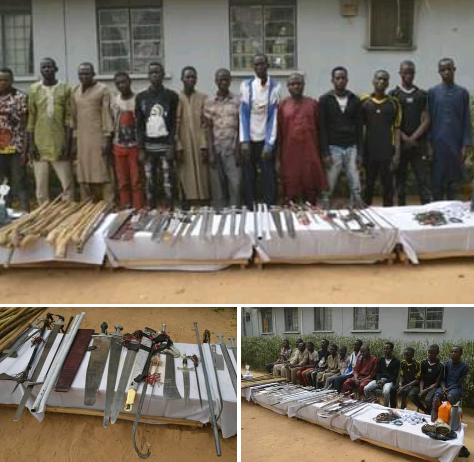 It was gathered that hundreds of thugs armed with dangerous weapons, invaded Jibril’s campaign office along Maiduguri Road and vandalised part of the building, furniture and billboards.

Spokesperson of the command, DSP Abdullahi Haruna-Kiyawa, in a statement on Thursday, said the arrest followed the instruction of the state Commissioner of Police, Sama’ila Shu’aibu-Dikko, to teams of Operation Puff Adder, which moved to the scene and restored normalcy.

The PPRO said large quantity of dangerous weapons, illicit drugs, charms and other items were recovered during the operation.

“On the receipt of the report, the Commissioner of Police, Kano State Command, CP Sama’ila Shu’aibu Dikko, fsi raised and instructed teams of Operation Puff Adder to move to the scene, restore normalcy and arrest the culprits.

“The teams immediately swung in to action. Thirteen (13) suspected thugs (Yan Daba) were arrested and the following exhibits recovered from them:

iv. 1 Parcel and 30 Pieces of Dried Leaves Suspected to be Indian Hemp

“Normalcy was immediately restored and situation under control. Investigation has commenced and suspects will be charged to court for prosecution.

“The Commissioner of Police, Kano State Command, CP Sama’ila Shu’aibu Dikko, fsi warns that, criminals will have no hiding place in Kano State. They are advised to either repent or leave the State completely. Otherwise, they will be arrested and face the full wrath of Law, the statement reads.

“He thanked the good people of Kano State for their prayers, encouragement, continuous support and cooperation. He urged residents to pray for the State, the Nation and report incidences to the nearest Police Station and not to take laws into their hands. Rigorous patrol and raids of criminal hideouts and black spots will continue throughout the State, as the Command will sustain the ongoing “Operation Puff Adder””

Ghislaine Maxwell is a ‘master manipulator, ‘ says woman who accused Epstein of sexually assaulting her when she was 22