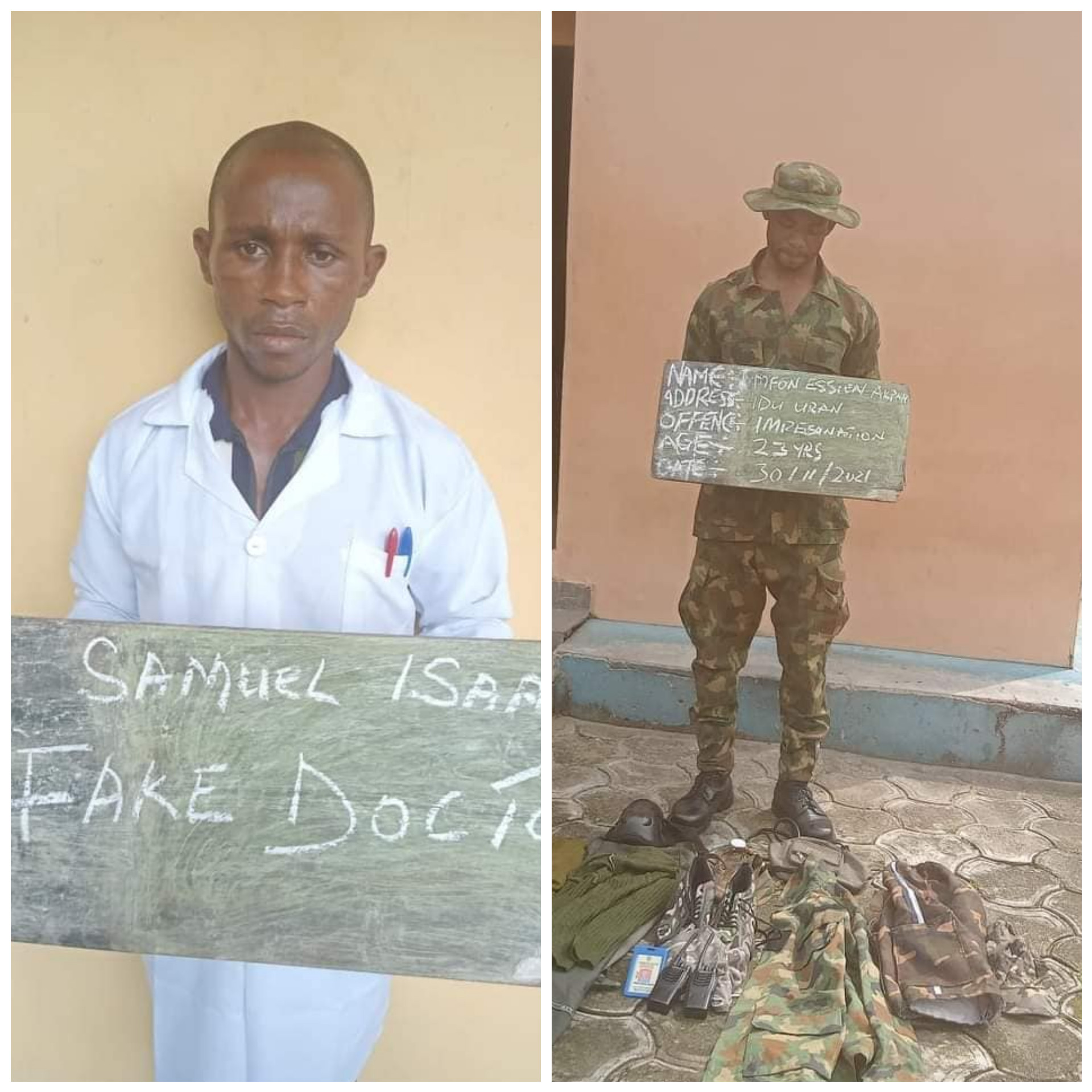 Operatives of the Akwa Ibom State Police Command have arrested ane Samuel Isaac Jumbo, who is alleged to have defrauded his own mother and unsuspecting members of the public by posing as a medical doctor.

One Akpan Mfon Essien, who specialised in intimidating and swindling unsuspecting people by posing as a soldier was also arrested

Spokesperson of the command, Odiko Macdon, who disclosed this in a statement on Friday December 3, said Jumbo was arrested at Tranquility Hotel at Nnung Oku village, Ibesikpo Asutan Local Government Area, following a tip-off.

“On 16/11/202, at about 1:00am, while on a Stop and Search operation along Nwaniba Road, Operatives of Anti-Robbery Squad reasonably suspected and arrested one Akpan Mfon Essien ‘m’ of Ikot Andem Itam Village in Itu L.G.A, who resides at Idu Uruan, Uruan L.G.A. During Interrogation, the suspect confessed to be impersonating a soldier,” the PPRO stated.

“In a similar development, relying on a report on 30/11/2021 at about 11:00am, Quick Intervention Unit Operatives of the Command proceeded to Tranquility Hotel, Nung Oku village, in Ibesikpo Asutan L.G.A and arrested one Samuel Isaac Jumbo ‘m’, aged 29yrs old of No. 26 Asokoro Road, Area II, Abuja who claimed to be a Medical Doctor attached to the University of Uyo Teaching Hospital (UUTH).

“During interrogation, the suspect confessed to the crime and stated that he is not a Medical Doctor as claimed. In his confessional statement, he stated that in 2015, he told his mother that he had gotten admission into the University of Lagos to study Medicine, since then, he has collected various sums of money from her.

“He further stated that on 3/11/2021, he told his mother that he was going for National Youth Service ( NYSC ) at Rivers State and collected the sum of two hundred thousand naira (N200,000.00) for accommodation from her after she had bought a lot of household items for him. He took the money and items, came down to Uyo, squandered it and continue to deceive unsuspecting members of the Public and the hotel management that he was a Medical Doctor,”

“To convince the public, he will dress up or carry his lab coat, use a bolt cab to UUTH Abak Road, after loitering around for a while, he goes back to his hotel and looks for unsuspecting members of the public to defraud. Suspects will be charged to court as soon as investigationis are completed.” the statement concluded.

No reports of deaths from Omicron Variant yet -WHO