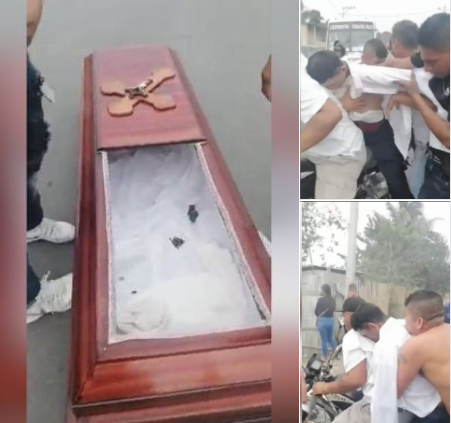 A group of friends removed the body of their murdered friend out of his coffin and put him on a motorcycle to give him one last ride in Ecuador.

Erick Cedeno, 21, died last weekend after reportedly being shot by two assailants while on his way to attend a funeral in Portoviejo, in Ecuador’s Manabi province

As loved ones prepared to bury Cedeno, friends removed his body from the coffin after taking permission from his family.

Video footage shows the group removing Cedeno from his wooden coffin and carrying his body towards a waiting motorcycle.

He is then positioned behind the bike’s rider, and another friend then sat behind Cedeno to ensure his body didn’t fall off during the ride.

A large crowd gathered to observe the bizarre scene as the body of Cedeno was taken on the motorcycle ride.