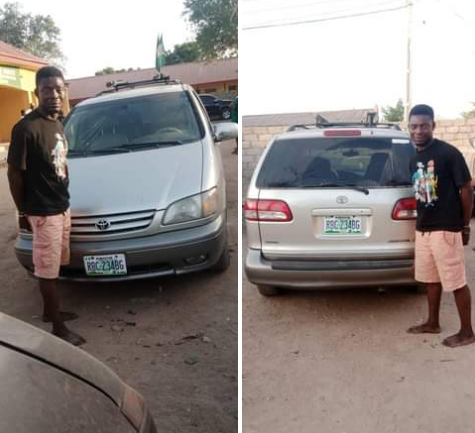 Operatives of the Nasarawa State Police Command have arrested a suspected notorious criminal who allegedly stole his neighbour’s car when she went to pick her child from a school in Abuja.

Spokesperson of the command, ASP Ramhan Nansel, who disclosed this in a statement on Sunday, December 5, said the suspect, Auta Balefi was arrested while trying to sell the car.

“Police arrest notorious criminal, recover stolen vehicle. On 4/12/2021 at about 1430hrs, while acting on credible intelligence, Police operatives attached to New Karu Area Command arrested one Augustine Idom ‘M’ 28yrs old of Auta Balefi, Karu Local Government Area of the State where one Toyota Sienna, Ash in colour with registration number ABUJA RBC 234 BG was recovered from him while negotiations to sell the vehicle was ongoing,” the statement reads.

“Preliminary investigation revealed that, the suspect was contacted by his neighbour to kindly assist in driving her to pick her up a child from school at Zone 3, FCT Abuja; the suspect criminally made away with the vehicle when the owner of the vehicle went into the school to pick up her child before nemesis caught up with him,” the PPRO added.

The Commissioner of Police, CP Adesina Soyemi thanked members of the public for their continuous support to the Police by way of providing useful information and urges them not to relent.

The CP further ordered that the suspect be transferred to the State Criminal Investigation Department, Lafia for discreet investigation.