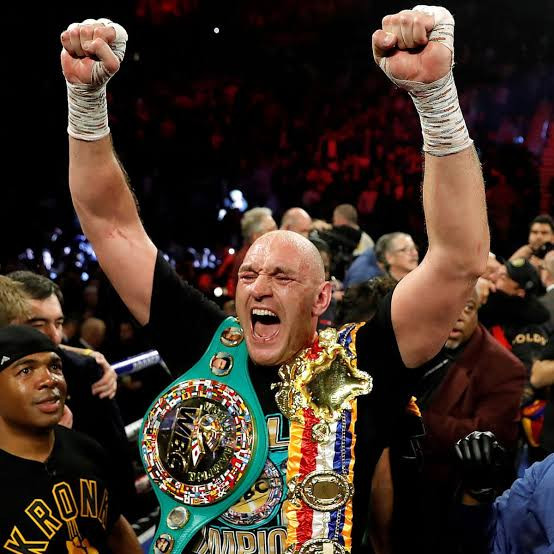 World heavyweight boxing champion, Tyson Fury has warned the BBC not to include him its nominations for the BBC Sports Personality Of The Year award 2021.

The Gypsy king has had a long-standing issue with the BBC over the award, for which he has been nominated on a number of occasions as the boxer is one of the most loved sport stars in Britain.

But he has had a long-standing issue with the BBC over the award since a petition was launched to have him removed from the award in 2015 due to homophobic and sexist comments.

He was angry in 2018 when he wasn’t even nominated despite launching a phenomenal comeback having returned from three years out of the ring due to poor mental and physical health.

His impressive return against Wilder in the first of their three fights that December, where he heroically rose from the canvas to earn a draw after being viciously knocked down in the 12th round.

Now, Fury has insisted that the BBC will be hearing from his lawyers if they attempt to nominate him again, even after his thrilling title defence against Deontay Wilder in October.

Speaking with the Telegraph, Fury said: “It means nothing to me and I don’t need it or want it.

“In fact, they will hear from my solicitors if they do put me on the list. Give it to someone who needs it. I don’t.”

Fury insisted that he doesn’t need an award to validate that he is the sports personality of the year.

“They wouldn’t give it to me and give me credit if I won 50 world title belts from the people who put it on, and I don’t care,” Fury explained.

“I should have won it three times already. I’ve got my wife and my kids. That’s all the awards I need. I’ll sue [the BBC] if they put me on.”

The BBC will announce their shortlist for the prestigious award next week with tennis star Emma Raducanu the favourite to win.

Fury is expected to defend his WBC title for the second time early next year in a homecoming fight at a UK stadium, likely against Dillian Whyte.

He is also in talks for a step aside deal that would see Anthony Joshua allow him to face Oleksandr Usyk for the undisputed title.